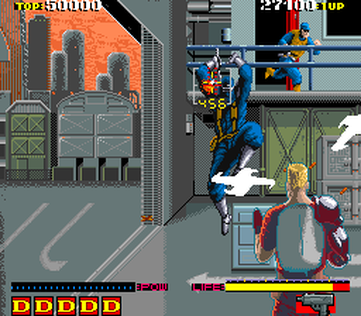 -
Some control issues (can't be dodging while charging up a smart bomb until the charge bar is full, annoying delay when trying to dodge right after shooting, would've worked better as a twin stick shooter (controlling your movement and your aim separately), inconsistent hit detection in melee combat (can only hit during certain windows and not always when it looks like you can such as sometimes when an enemy or boss is moving sideways), can't shoot some bosses you've knocked down as they're moving into melee again after getting up)
Can't do a melee combo ending in an uppercut
Sometimes uneven difficulty curve (very tough second boss, easy level 6 mini-boss (with the extending robot arms))
You'll sometimes miss power ups due to the game shifting to a segment where you're moving forward through a corridor
Trial & error (bosses, melee timing)
No weapon inventory (picked up weapons are used immediately)
The hole in Duke's chest looks a bit awkward (dithering or transparency during melee would've been fine)
Can uppercut some enemies several times in a row
Repeats the first two bosses once
So-so ending