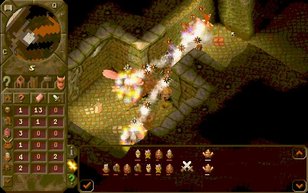 ​
​
+
Unique concept
innovative and interesting mechanics (caretaking of creatures and base building combined, creatures gain experience via training/fighting and gain new levels up to level 10 (most of them gain new abilites at certain levels), possess any creature to enter a FPS mode, disease spell, sacrifice creatures at a temple to gain stronger ones, slap creatures to make them work harder, hold button to increase effectiveness of spells before casting (costs extra money), imprison/torture/convert enemies (torturing can also make parts of the enemy dungeon become revealed), notifying messages for any event (remove at your own leisure), research spells and traps, each creature has its own personality (needs, weaknesses, skills, rival creature)
comical (dry and sarcastic, possess chickens, make bodies decompose by having hell hounds pee on them in the graveyard)
fast paced (lacks proper speed options though)
fun to play as the bad guys for a change, decent ambience design (only the on-screen and nearby action is heard), hotkeys for most useful actions (including zooming in and out of view (home/end), and mini-map), hidden bonus levels and power ups, sellable room tiles and traps, save anywhere (~10 slots), set 1-10 markers (a chosen position on the map) which you can go to when needed, hotkeys for going to the position/creature that corresponds to a warning message (annoyed create=A, fight=F) and for moving between built rooms, battle overview message (lets you use spells and pick up wounded creatures more efficiently - unfortunately if a creature is not currently attacking or getting attacked it disappears from the overview)

+/-
You can only lift 8 creatures at a time
creatures usually don't carry over to the next level (you sometimes gain the power to keep one creature but you won't know beforehand in which levels this happens)
you can form groups via a Barracks (possessed creature becomes the leader) but it doesn't work for some creature combinations
creature spawning is somewhat random (there are situations where you want specific creatures, you can make unwanted creatures leave though by dropping them at an entrance)
some spells are super cheap in multiplayer games (boulder trap, break wall)
computer assistance is an interesting concept but not very useful the way it's executed, bringing up the options menu doesn't pause the game, gory (suits the game's atmosphere)

-
Doesn't have much of a cohesive story
room building could've been faster (need to place every tile one at a time)
research is set to a pre-determined order (can be sped up via Sacrifice though)
manufacturing is random
some traps and spells aren't very useful (gas trap, cave-in)
​selecting specific units could've been made more efficient (creatures are hard to spot behind walls (though you can rotate the view), hard to select one creature in a crowd on the same tile), training takes too long, micro management heavy (keeping everyone happy and not fighting each other, using spells (especially powered up) and creature skills, no box selecting/select by type via shortcut, general lack of direct unit control outside the possess mode - makes battles with other keepers messy since your Imps will move into the frenzy and get killed), sometimes weird AI (powering up a spell targeted at one specific creature causes all creatures on the same tile to stop their actions (same thing happens while slapping or picking up your Imps - good when there's just one but slows you down when several of them stop), drop an Imp in front of what you want it to work with and it might do something else instead), repetitive (every stage takes place underground and looks pretty much the same), some trial & error (digging into new areas with traps or enemies in them, some negative Sacrifice effects, knowing when the lord of the land will approach), inverted up/down view during possession, spells 7-10 are invisible in FPS mode, can't play as the good guys?, uneven volume levels, no speed or difficulty options, lack of hotkeys for building a certain room/selecting a certain spell, need to hover the mouse pointer over friendly creatures to check their level and HP unless they're in battle (not needed for enemy creatures)

​
Bugs/Notes:
-Using the 'increase level' power ups too quickly after one another will cancel one of them out
-Game often crashes (Win7)
-Infinite Gem bug (not mineable, level 12)
-Bridge bug (bridge tile turns into a wall when Imps mine out an adjacent gold tile - need to sell and rebuild)
-Frameskip added to KeeperFX Mod