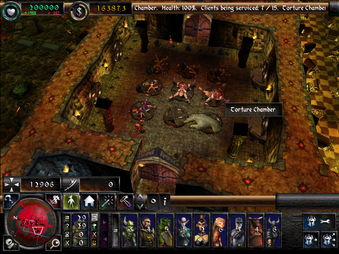 
​
+
Fully 3D besides the pre-rendered mouse pointer hand
voiced tips and mission briefings+debriefings (briefings are also more detailed with a camera showing points of interest in a level) - enemy heroes also talk a bit more at times
same great voice actor for the narrator/advisor
some innovative and interesting mechanics (new special abilities for possessed creatures (sniping, dwarf/imp chucking, bat transformation, hypnotise, cloaking, area heal, disarm trap - troll, block turret shots and some fireballs with melee attacks, jailbreak friendly creatures) - besides these you can also do more effective attacks on key parts of a level in this mode, see DK1)
each creature has its own personality (needs, weaknesses, skills, rival creature - DK1)
pretty nice intro and between level cutscenes (the latter are very short though)
comical (dry and sarcastic, possess chickens, joke notifications when nothing else is happening, slapstick/silly/whimsical cutscenes (these usually aren't funny though))
fast paced and with added game speed options
still fun to play as the bad guys for a change
pretty good ambience design (only the on-screen and nearby action is heard?), hotkeys for most useful actions (including zooming in and out the view (home/end) and mini-map, map screen for easier browsing of the level (M), scroll to current fight (F) or to a portal (P) or to your dungeon heart (H), ), sellable room tiles and traps (DK1), save anywhere during a level (except while possessing a creature, ~10 slots?), set 1-10 markers (a chosen position on the map) which you can go to when needed, hotkeys for going to the position/creature that corresponds to a warning message (annoyed create=A?, fight=F?) and for moving between built rooms, some interface/control improvements (faster room building and digging via box selection, easier to see level and HP for each creature, can hold PageUp to only pick up objects), the dungeon heart also serves as a small treasury here, imps now level up by doing performing their usual tasks (don't have to use the training room), Mana resource (replaces gold as the cost for casting spells, regenerates over time and the speed is dependent on the size of your territory, imps and traps also depend on some mana) - better balance overall as some spells were OP before, manufacturing in the workshop is no longer random, casino room (creatures can spend their earned gold here - returning it to the player and making them happier, if a creature wins you can also be evil and beat the prize money off of them but you have to do it in a locked room out of sight from other creatures), combat pit room (can drop enemy creatures/heroes into it - needed to reach levels 5-8 here and field combat is needed to go beyond that), creatures have more distinguished combat roles (minor difference though), pretty detailed ranking and score after each level, my pet dungeon mode (access to all rooms/spell/traps based on a timer until the last level, goal is to reach a certain score instead of campaign objectives and you can control when you'll get invaded, a "hero toolbox” which allows placing a hero directly into a prison or torture chamber or anywhere else (allows testing of traps), can play any previously reached levels, can't summon Horny), some sub objectives, hidden items that unlock bonus levels (they also let you summon horny/the horned reaper once in the following level - once you have four you can summon him more than once, one of the bonus levels is a golf mini-game where you slap boulders into holes and another you bowl down dwarves with them - these are really hard though because you can't make the game speed slow enough to be able to direct the boulders properly, the third bonus level is a maze with some minor switch puzzles (you go through it in possessed mode as a dark angel)) and hidden power ups, can replay beaten levels, 4-player MP/skirmish mode with options for what rooms/spells/traps are available, can play as the good guys but only on some skirmish maps, can lift 25+ creatures at a time here (8 before), get info when hovering over a terrain tile or magic item, battle overview message is now a constant sub menu (lets you use spells and pick up wounded creatures more efficiently, however you might miss creatures that just moved out of combat when going by the combat tab - proper control group hotkeys would've helped), a few branching paths during the campaign (can sometimes choose between 2 levels and unlocked hidden ones can be accessed at any point here), can disband creatures by dropping them on the portal, can close down hero gates by claiming all the land surrounding them, secret elite versions of creatures with unique skins (need to figure out specific room tile combinations via trial & error to make them appear though and they don't get their own slots in the gui - at least you don't have to keep their odd room setup once you've attracted an elite, also can't attract these in the campaign - only find them as neutral creatures in some levels), some cool new spells (turncoat (temporarily convert enemy, cast into an Unholy Temple after sacrificing a Black Knight and a Knight will appear), tremor/break wall also destabilizes doors+damages traps+can scare creatures here, create gold, raise dead (skeleton) - creature spell)), optional reverse vertical look in FP view/possessed mode, can switch to top down view and 2D isometric/oblique view, training is a bit faster (from lvl 1-4), some levels now have scripted events,

+/-
Auto-aiming turrets
creatures become dazed when dropped now (each one has a set recovery time) so you can't simply drop them on top of the enemy
creatures usually don't carry over to the next level (you sometimes gain the power to keep one creature but you won't know beforehand in which levels this happens)
creature spawning is somewhat random (there are situations where you want specific creatures, you can make unwanted creatures leave though by dropping them at an entrance)
bringing up the options menu doesn't pause the game
gory (suits the game's atmosphere)
much easier first few levels
fewer creature levels gained from the training rooms (4 instead of 10) - they now need to use the combat pit (gladitorial fights) to level up beyond that which requires more micromanagement and it still won't let you reach level 10 (need to fight enemies to reach it)
nerfed Lightning/Thunderbolt spell but it does knock enemies over now (spells start off weak and are upgraded over time with research here instead of you holding down the button to power up spells by using more gold, upgraded imps can withstand several lightning spells here and it's harder to accumulate a lot of mana (due in part to imp and trap upkeep, helped by mana pools (rare) and the temple but it's a late game room) so you have to rely more on traps/turrets and creatures in guard rooms - while spells are downplayed overall there are still a couple of interesting campaign levels where you have to rely on it as gold and room space is very limited)
now need to build stone bridges over lava
no alternate food types, you can form groups manually here though it is a bit clunky (see below) - doesn't work for some creature combinations?, can pick up high or low level creatures of a specific type only via the sub menu but not creatures of a specific level (ctrl+"." or ctrl+"," respectively) nor creatures who are badly hurt only, no difficulty options in SP but you can change the enemy AI's personality in skirmish mode (pick Idiot for an easy game), adds some new creatures while removing some older ones (new: black knight, dark elf, dark angel, rogue, salamander, maiden (woman/spider), goblin, salamander; removed: beetle, demon spawn, dragon, ghost, hound/hell hound, orc, spider, tentacle), can't place a "don't go here" flag for your imps to keep them from moving into traps or turret fire, some time limited levels, can't "area of effect" heal your creatures with the heal spell, horny/horned reaper is now a time limited summon spell and can't be killed (much easier to use effectively but less unique than how it worked in DK1 where you had to sacrifice certain creatures to make them appear and then be careful not to piss them off or they'd kill your own creatures and leave), the game auto-saves between levels (pick continue campaign to load this save), unit caps are pretty small (15 for the first portal and then 5 additional creatures for each portal claimed after that) however you can also convert enemies and sacrifice creatures for others, there's no elite version of the Maiden creature, generally can't convert the lord of the land here (also can't torture him between levels although that got old fast in DK1),
some spells are super cheap in multiplayer games (boulder trap, break wall/tremor)?
computer assistance is an interesting concept but not very useful the way it's executed?
research can't be sped up via Sacrifice here?

Bugs:
-Can crash when loading a new level (happened once, however if you restart the game and pick continue you won't have lost any progress), can crash during levels (once in 8/snapdragon), can crash after beating a level (once after goldenglade - the game did save the completion though so I could keep going via the continue campaign option
-The game is locked to max speed scrolling when using oblique perspective (2D isometric view)
-Sometimes your imps won't carry corpses to the graveyard(s) in Goldenglade (a level where you have no portal)
-Sometimes menu buttons stop working if you alt+tab in and out of the game
-Can't attract dark angels in the final level (nor black knights without the guard+mistress combo sacrifice)?