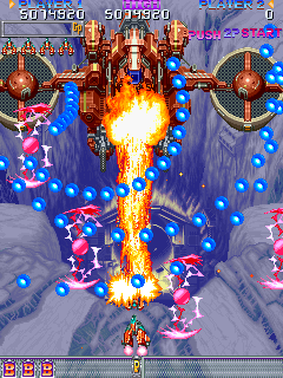 
+ Three different ships (orange is fastest but with the narrowest shot, green is medium speed except when using the laser (where it's the slowest) and its side beams aim at a wider angle as you move sideways, blue is slowest but with the widest regular shot (side beams at a 30 degree angle); can change after using a credit), intense action, good art direction, 2-player co-op, rapid fire/laser shot dynamic (move slower but do more damage with the constant/laser beam), auto-fire (options menu - hold F2 for three seconds), perky commentator throughout the game (level intros, boss fights), difficulty options (4 levels, lives per credit (up to 5), coin worth), semi-hidden items (points?), seven levels of upgrades for the weapon (every other level increases the rate of fire), two different bomb types (laser or smart bomb, both protect you from enemy bullets), respawn on the spot (most weapon power ups and 1-2 bombs drop from where you died plus you regain 3 bombs automatically so you can fairly easily power up again), some huge and detailed sprites, satisfying explosions, kill counter (chaining kills gives more points, value of the first enemy in a chain has the biggest effect on the score), fairly unique premise, rank system (changes depending on how well you play, goes to easy when on your last life),

+/- No shields or HP upgrades, much harder to play without frequently using bombs, very small hitbox for the player ship, somewhat slow movement speed even with the orange ship (can't be upgraded), complete lack of checkpoints means you have to use save states or replay to practice the most difficult parts and actually get good, no score attack mode (added to Saturn ver.), bomb refill after each boss, it's possible to prevent post death bullets in the second loop from spawning by destroying the enemy at point-blank range, hidden 1-up in level 4 but you need a guide to understand how to get it,

- Slowdown (not to a crawl but it's pretty frequent and a bit uneven), uneven difficulty (spikes at level 2 boss and level 4), trial & error (boss patterns, cheap attacks from the sides and behind, post death attack by the second to last boss), loose horizontal scrolling (leads to cheap deaths), scratchy sound (except for the voices, clearer and in stereo music on Saturn but everything else is worse) and mono music, repetitive (need to play two loops to get to the real final boss (even on Easy), no speed shifts or obstacle hazards, not much of a difference besides bullet patterns in the second loop), can't turn off the commentary?, no alternate weapons (could've been an alternative to the different ships), somewhat bland ending and the text is drawn too fast, somewhat lacking animation besides the explosions,