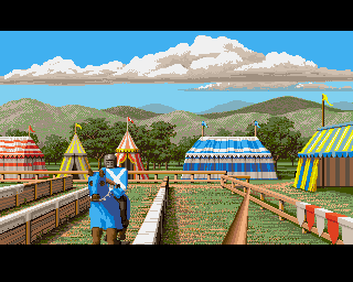 ​
+ Hybrid gameplay (turn-based strategy and siege attacks, real-time jousting/siege defence/raiding combat), four different playable characters plus four CPU only characters, basic character building (leadership (affects how fast your men respond to commands during field battles, when you need to switch tactics in a live fight), jousting (how fast you can move your lance and how steady you can hold it, how much strength you start with in the melee combat phase of jousting, how hard you can hit with your mace and how long you need to wait between attacks for higher damage), swordplay (only affects your starting health during enemy castle raids)) - only leadership can change during the course of a game (winning a fame joust increases it, being stuck in sieges over and over lowers it), can get help from robin hood (enter his forest) three times during a game, real-time field battles, monthly income stat, recruit and redistribute armies (soldiers, knights, catapults), your character's portrait will change depending on how your game is going, nice cutscenes (full screen artwork stills with text boxes, some animation), good art direction, can investigate any piece of land in the strategy segment (shows owner, vassals (this number adds to your army after conquering a neutral piece of land if the army defends from that position), income per turn), can build new castles/forts, can retreat from a failing raid to avoid being captured, fight alongside 2 cpu allies during raids and rescue missions in this version, mouse controls in this version (not good during the raids though), recruiting soldiers doesn't end the turn in this version, some pause before troops start dying during a field battle here,

+/- Can't play as a southern lord, no troop losses when conquering neutral land, you get the first move (good since you get to pick which land to conquer first, bad since the enemy can then retaliate during the same turn), can move through your own or "allied" (blue/Saxon) territory as well as transfer troops without ending your turn, can only have one moving army at a time (and can't transfer part of it to a conquered piece of land in this version), can challenge the same lord over and over during a tournament in this version, defeated lords still fight in tournaments, sieging with more catapults doesn't give you more ammo to use, retreating your army when attacked moves it back to the home castle, you'll be banned from future tournaments if you hit the opponent's horse with the lance, much easier catapult aiming in this version and no interruption between shots

- Some interface/control issues (can't cancel troop purchases or transfering troops from your home castle to your moving army in this version?, even worse combat controls during raids and you can't see your unit's health in this version, simplistic and rather clunky controls for jousting and it's a bit harder to win than in the NES version (need to hit a small black cross on the opponent's shield and the lance bobs up and down quickly - however there's no random element to how the lance behaves here), simplistic field battle controls (you can only give a general order to your army - not control individual squads/regiments), can't check your army while reading the map (need to go into the transfer or buy army screens), can't pause during a field battle and they can be over extremely quickly, can't see where enemy armies are or scout their size, can't examine land or character stats during a tournament, selecting icon covers the text in the main menu in-game and movement here is too sensitive (it also doesn't wrap around), ), Geoffrey sucks?, no diplomacy, no music during the strategy segment, no melee combat phase during jousting tournaments here, some annoying random elements (raids by outside forces as random events which you can't defend against (can lose half your gold, can lose all catapults here as opposed to one on NES)), no confirmation if disease and greek fire have any effect or when you win a siege, can only recruit from your home castle, no notification when a lord is defeated, pretty ugly field battle graphics, no difficulty options, 1-player only, no saving, easier strategic AI than in the NES version (everyone goes for your moving army even if it's too strong for them), no bombardment or outflank options during field battle in this version, trial & error (here you'll select your tournament opponent before selecting land or fame as stakes and you can't cancel after selecting the opponent), no field battle graphics here (just shows the menus with troops numbers), annoying disk swapping during tournaments here, no crossbow segment when defending against a siege here (just shows a short cutscene of the enemy attacking your castle with their catapult then goes to the field battle), can't use the greek fire nor the disease projectiles in this version?, can't pass on a turn in this version,

Bugs:
-Troops in the home castle are replenished if you empty it in the beginning


Comment:
​I didn't expect to be blown away by this one but seeing as North & South still held up pretty well I though I'd at least give it a chance. The Amiga original has some interesting ideas but almost none of them are all that well realized so it mainly relies on its great presentation for the time and a setting that isn't too common in games (13th century England with some folklore thrown in). The NES version makes some decent additions but loses a lot of the charm by not having more stylized visuals fit for its limitations, and the AI isn't strong enough on the strategic level to keep things interesting for more than a couple of playthroughs. Still I might give the sequel/remake for Amiga CD32 a shot.