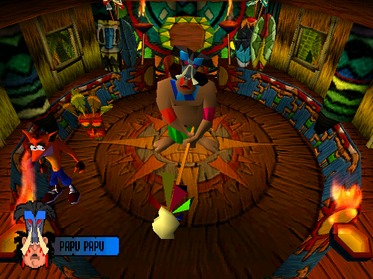 + Mario-inspired gameplay (block switches, springs, hit boxes from below to get items, level paths that appear after collecting a certain item in another part of the world, etc.), some alternate paths through levels (pretty rare though), decent use of color overal, many hidden boxes, mid-level checkpoints (sometimes more; unfortunately they don't save your box opening progress (and even if you backtrack to get all boxes after dying the game skips the tally screen!) so if you're going for 100% you'll have to restart the level after dying), save feature (shows collecting stats and number of levels left to beat (the latter is a minor spoiler though)), temporary invincibility power up (collect three masks), enemies can be bounced into objects or other enemies behind them, exploding box puzzles, some decent bosses (ripper roo, koala kong, nitrus, cortex) - most are pretty simple though, replay beaten levels, death animations, one alternate ending if you 100% the game (which isn't really worth it), a few unlockable levels (collect three cortex icons in a level),

+/- Can't control the camera (the auto angles aren't always the best (especially when moving backwards in a level) and Crash easily ends up off screen if you stray just a bit from the path), very straightforward and linear levels overall, can't save unless you collect a gem and beat the level it was in or beat a bonus round?, can't jump on reguar boxes without destroying them (could've been used to reach new places), fairly steep difficulty curve, invisible charge/cooldown meter on your attacks (you can spin a couple of times in a row but then have to wait for a few seconds before you can spin again), DKC-inspired setting (tropical islands), spinning into items makes them fly off screen, loose slope momentum from jumping, you can remove the effect of a tnt box explosion by moving far enough away from it,

- Sometimes glitchy hit detection for the lowest boxes in bonus rounds (Crash won't always bounce off of and destroy a box when you land on it), somewhat bland bonus rounds (just a different location like in SMB1), somewhat hard to judge distances on the z-plane, some frustrating backwards/out of the screen segments (boulder chase), can't view how many boxes you had left to find and open on a level when on the hub map (the game doesn't save your collecting progress for a finished level either), no difficulty options, so-so mid-air control after bouncing on a spring or box, can't access the volume controls from the pause menu, can still be eaten by plants while invincible, can't move backwards after reaching the end of a bonus round, some difficulty spikes (slippery climb level, boar ride - uneven framerate), sometimes unforgiving hit detection/physics (shield enemies, first boss, some platform edges), some trial & error (parts of the lights out level, finding where a box was spawned by hitting a !-block, can't make enemies respawn, see camera angles, boss patterns (crash can suddenly duck behind cover in the tommy gun boss fight)), lots of pits and death traps, awkward island transitions, somewhat floaty movement controls (Crash takes an extra step after letting go of the button if you've built up some speed), tedious to collect all boxes in some segments, some tedious vertical platforming, no alternate power ups, levels don't flow as well as in Mario/DKC/Sonic, kind of repetitive, generic art direction overall (some nice backgrounds though), douchy main character who also looks kind of weird in-game compared to later titles, fairly stereotypical tribal theme with mostly forgettable music, smudgy textures and blocky models compared to the sequels