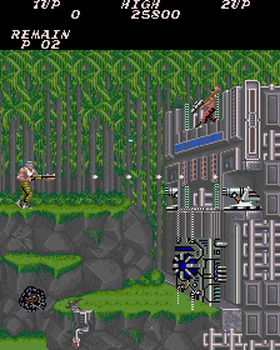 + Better TPS/rail shooter levels (walk through tunnels, map feature (not that you can actually get lost), easier to judge distances), 8-way aiming, 2-player co-op, large and varied bosses, temporary shield power up, auto-fire (as a separate weapon here while on NES there's an upgrade that makes shots faster (the effect does accumulate there though)), difficulty options (4 levels, credit options), respawn on the spot

+/- While switching from forward to diagonal aiming you can get a few shots off in an angle between them, while you can choose to start with 7 lives you'll only get 3 after using a credit, spread shot is overpowered, can't crawl, somewhat slow jumps (good for getting more shots off in mid-air, sometimes bad for dodging), no dodge move, no weapon inventory (makes the difficulty uneven), can't jump while in water, can't stand still while aiming like in the 16-bit console games,

- Auto-fire jump (can throw you off during vertical platforming especially), tate/tilted screen (only good in the vertical segments), only 4 credits (on easy! - can be changed to 7 or infinite though), pretty tinny and sharp sounding FM audio overall (music was remixed in the 360 port), goofy player character animations, same control issues as on NES (no jump height control, vertical-based jumps, stand up from pressing forward while crouching and shooting), so-so use of color overall, pretty short, slower walking speed than on NES (but the tilted screen makes it less noticeable), some slowdown, trial & error (boss patterns, some ambush attacks), easier tank mini-boss in the winter level (as long as you have an upgraded gun), cheap final boss without an upgraded gun, harder to tell the difference between the laser and machine gun/rapid fire weapon power ups,