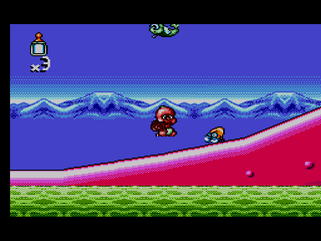 - Some levels (sinking tree, spooky cave, car factory - replaced by only 2 levels - one extra level in the first area, one extra sewer level), enemies (big bird on the wire and huge dino in the first level) and animals are missing, some effects missing (butterflies and animated water in the second and third), only one bonus level (compared to 3 on MD/Amiga), some slowdown, some trial & error, one credit and almost no extra lives to get (and unlike the MD version you don't win new ones in the bonus stage), boring bosses (that take longer to kill than in other versions), quicker cooldown time after getting hit


Full analysis for comparison to other versions:
- 17 levels (all with slightly different layouts)

- easy, normal and hard difficulty (on hard, the only difference I could notice was that bottles give you less health)
- smaller sprites - nearly all of the big sprites from the MD version have been downsized
- wimpy sound effects, the system is capable of better effects than this
- very discrete drums in all songs
- lacks these animals (that you can ride): ostrich, dino, deer, goat
- also lacks some enemies: the huge dino in the first level (yes, replaced by a new enemy: a female wrestler), the big bird on the wire (the one with an extremely thick fur, not the one that saves you from the flood on level 5), the balloon riding enemies on fruit mountain
- also lacks the fat guy who keeps getting hurt
- minimalistic but less distracting backgrounds.. that don't always make sense (houses floating in mid-air, a forest background in a "stoneage suburbs" level).
- the cooldown time after getting hit is shorter, which often leads to you taking more than one hit from spikes and such if you mess up a jump
- bouncing boulders in the stoneage suburbs levels
- the gui (life meter etc.) is layered behind the background and sometimes disappears completely
- fewer, and easier enemies (for example in level 5 there are less fish, in the snow levels they move slower, and the squirrels in the treetrunk level are much less of a threat)
- bosses take much longer to kill because you can't spam hits on them (on MD you can get in like 6-8 hits in a row)
- octopus boss is ridiculously small in comparison to MD version
- flamethrower enemies don't shift color to let you know when you can approach them
- very hard to see the spikes in the treetrunk level
- new enemy in the above level, a spider clinging to the vines
- the statues on "fruit mountain" no longer have any function (they were used as springs in the MD version)
- you can't move sideways while clinging to the balloons in fruit mountain
- only has one type of bonus level (the river race) ?
- no spooky cave level
- no sinking tree in lava level
- the final level has a one colored background
- some bosses have different patterns. For example the "sergei the sea slug" boss is much easier, there's a lot of slowdown, and when you win it just waves its arms at you. The sprite itself has no animation.
- no car factory level
- one extra level before the first boss, and an extra sewer level (these play like the other levels, nothing special about them)