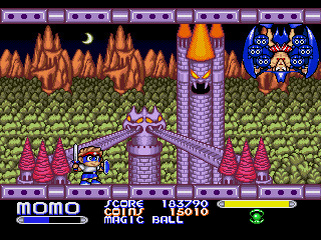 
+
Wonder boy in Monster Land-style gameplay (buy items and upgrades from shops with gold dropped by defeated enemies or found in different spots, lots of hidden items/gold, get hints from fairies)
Some good bosses
Choose your path (order of the first three levels)
Two different characters (one better at melee, one at magic)
Smart bomb/magic attack (gets stronger after each beaten level, or random depending on the option chosen)
Difficulty (Practice, Normal, Hard) and control options (hidden, hold A+B+C on boot up)
Pretty good use of colour (and of the sound chip, at times)
Wall jumps
Bosses sometimes talk before or after battle
Mixes in a few shooter-style scrolling levels
Somewhat comical (Dracula fight)
Decent cutscenes
Some nice level transitions
Mini-bosses

+/-
Need to find a hidden item to get the good ending
Very short cooldown time on the sword and on enemies
Sometimes forgiving hit detection
Limited continues (just one and no extra lives, possible to find a few and you respawn on the spot though)
Two bonus levels (very simple scrolling sections where you try to grab all the gold, impossible to get a perfect score in the second one?)
Can’t move while crouching or swinging the sword
Dying makes you lose half your money
Can only re-buy a lost credit (not buy extra credits – makes Hard mode a lot harder than Normal)
Respawning enemies let you grind for money (pretty much needed on Hard)
Most enemies take one (weak) hit from hitting the player
Respawning causes a smart bomb (not sure how strong)

-
1-player only
Pretty short (~40 min)
Somewhat forgettable design (rips off wonder boy and mega man)
Some re-used bosses (dragon and scorpion)
Can’t move backwards in a level past a certain point (about half a screen’s length)
Some weak sfx (swinging and hitting stuff)
Most hints are useless
Some trial & error (enemy spawning points, boss patterns, can’t buy anything after the miner tank boss)
Some annoying/repetitive music later on
Somewhat poor jump height control (high default height)
​No alternate weapons or attack combos, some slowdown when there’s a lot of enemies and coins on screen (only a real problem during the escape sequence)
You only get a "congratulation!" screen for beating Hard mode


Notes:
The stars? Cross symbol? – Nothing in the manual
Hard mode: Enemies take more hits, do more damage, and some of them are faster
Congratulation screen is a bit glitchy in emulation (Fusion)


Arcade (Normal/Default) version:
+
2-player co-op
Credits aren’t limited
No slowdown
Graphical differences (some more colour, animation and background detail, nicer level transitions (sub areas tie together where on MD the screen goes black and the player appears in the next one))
Two additional power ups (a clone power up (shoots projectiles for a short period of time) and a magic shield power up (blocks 3-4 hits but also prevents magic from being used) – both are rare)
Some additional enemies (fish whirlwind formation enemy at the beginning of stage 5 (second underwater part, doesn’t seem to spawn if you enter the building quickly), the monster statues at the beginning of stage 7 (upward scrolling shooter part) now shoot out bats and can be destroyed), some bosses and enemies have one additional attack (some of the small vampiric flying enemies can latch onto the player from behind and prevent magic usage, pink fish mini-boss can block but is otherwise easier, rock monster (first boss) + bouncing ball + scorpion + the clown’s first form can all knock the player into the wall (stuns you for a second or so and is actually pretty annoying), the clown can spawn worm enemies in his first form)
A few more difficulty options (8 modes in total, players can have up to 4 lives per credit)
Cutscene differences (the intro has two more screens introducing the brothers but both it and the title screen are silent (attract mode style)
Staff roll shows the bosses again and has one more minor scene showing a closing storybook
The cutscene where the kids enter the door (to stage 4) shows a creepy building around the door after they’ve entered)

+/-
Less forgiving hit detection (can’t hit enemies standing behind the avatar with sword swings, makes miner tank boss’ second pattern harder)
Weapon and health upgrade combined into one power up which is easy to find
Some enemies and bosses take several hits less to kill
Most bosses and some enemies move faster (it’s good that the miner tank and the clown’s first form are harder but some earlier bosses make the difficulty curve less balanced than on MD)
Some bosses are more aggressive (dragon’s heads a more erratic and it’s harder to kill them off one at a time, bean man throws more beans)
Can’t pick between the two brothers in 1-player and they don’t have different strengths?
The twins have less health throughout the game (they can only take 2-3 hits from most things at first and only 3 hits from the later bosses even after upgrading)
A few more worm enemies in the passage before the Dracula fight
Harder to grab the items before the first clown encounter without taking damage
Somewhat different final battle area
There’s a charge attack that triggers when you have no magic/smart bombs left (looks like the occasional beams shot from the sword in the MD game but reaches a bit further) – not very useful as it does no extra damage, magic charges are handed out at the end of levels (seems to be based on your score?)
Fewer respawning enemies in parts of some stages (1, 3, 7)

-
Weird jump control (no height control unless you duck, during which the height is lessened drastically – only useful at one or two points in the game)
No shop/economy system! (gold is just for points, weapon and health upgrades are found in the levels and they aren’t hidden)
Super annoying horn sound when low on health that doesn’t stop until it gets refilled
Much fewer hidden treasure chests to find
Sometimes worse color use
Somewhat worse sound design overall (fighting sfx samples are a bit more satisfying here but not very high quality)
Much faster text when NPCs or bosses talk making it hard to read what was said unless you pause the game
No fairies or item quest (you get the second orb by beating the clown)
​