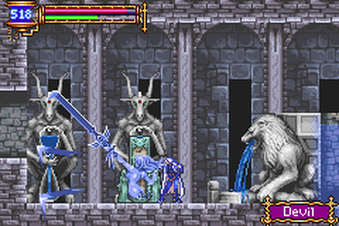 +
Soul system (steal enemy abilities by defeating them then use these as sub weapons/shields/specials – three different types can be equipped (but not combined), adds a lot of versatility)
Improved teleport system (choose where to go in the map view)
Improved shop (stays in one place close to a portal, sell or buy anything)
Many different weapons
Somewhat improved animation and spritework, sound quality is back to around SNES level (the music is scratchier though and with few stereo effects but the bass is pretty good)
Faster jumps than in HoD
Dash is now limited to one shoulder button
New moves (glide jump, swim and walk on water/sea bottom)
Item placement is somewhat better than in HoD (potions are still sort of placed at random)
Hearts now refill the magic meter (good since they were getting redundant, magic meter now fuel for sub weapons)
The story has some more meat to it than usual and is probably the most unique so far, breakable walls are back (though much fewer than in CotM and you need an ability to spot them meaning it takes up a slot you could've used for something else), improved menu interface, better enemy variation, three endings (which one you get depends on your equipment during the finale rather than choices made throughout the game), unlockables (hard mode - should've been available from the beginning, boss rush and an alternate character (Julius Belmont - no equipment/items/soul abilites and no MP regeneration but he has sub weapons and starts out with the various required moves for exploration, he also has a whip swing and moves a bit faster, he also has a forward dash that goes through enemies without taking damage though it is a bit clunky to use; however he levels up only after bosses so gameplay isn't as open as it could've been), battle arena is back (sort of - it's a required area containing three optional challenge rooms that aren't particularly hard here), the (real) final boss is actually pretty challenging unless you spam abilities, some nice graphical effects (mostly SNES- and arcade-like stuff), no more neon glow around sprites, in-game bestiary, quick save/sleep feature lets you quickly backtrack to the beginning of the current area/room (might've been better to let you start at the most recently visited save point instead), shorter knockback when being thrown from taking a hit (in mid-air or from a stronger attack), can't hold more than 9 of each item at once, some sequence breaking is possible without glitches (castle corridor>floating gardens by perfectly timing a double jump, castle corridor>inner quarters by floating and double jumping in the wide room near the middle of the area, see below for the others), flight (transform into a bat), nice build up before the Legion boss, somewhat humorous (some abilites, excalibur still stuck in stone when wielded), some items are unique to hard mode (other than that it only makes enemies do more damage and take more hits to kill though)
​
+/-
Level design is much more linear overall
Many more characters
Modern day setting
The colours are somewhat toned down compared to HoD
Even more feminine main character that looks like Juste/Alucard
Some abilities are lifted from previous games, much more forgiving mid-air control when performing jump attacks (lets you move backwards after the attack), attacking again right after landing after a jump attack lets you attack twice in a row without delay (similar to SotN; only works with faster weapons though) - on the other hand your character doesn't hold out his weapon in mid-air for as long as in the previous games and the jump attack is cancelled if you attacked right before landing (also only for faster weapons?) so it evens out, can't view different attack abilites' stats in the menu, slowly regenerating MP, dropped items disappear after a few seconds, somewhat faster box pushing? (no pushing animation here either by the way), a bit harder to dodge in close combat since you can't mash the dash button anymore (if you don't time them right the action doesn't register), catoblepas' petrify ability doesn't work on some enemies and you can no longer stand on petrified enemies (could've been used to reach some areas earlier), pretty short invincibility time once again, swimming (need an ability to dive though - creates another gate), poison now weakens your attack instead of draining your hp, no mp/hp upgrades (perhaps more frequent level ups instead? not sure), doesn't show bosses' health bars, some OP weapons and abilities (Mandragora, Devil, Claimh Solais sword), new game plus (start with the map revealed, all souls and all equipment but not your permanent abilites so the game world doesn't open up more), Excalibur (boss rush reward) isn't quite ultimate since it's not considered fast

-
You have to kill enemies over and over to gain their abilities (based on luck like with the cards in CotM – leads to overleveling, even with a max luck code enabled you'll have to kill some enemies 5+ times to get their ability)
Starts out too easy
You need three specific souls equipped during the Graham fight to get the best ending (these are hinted at though)
Mostly poor AI considering your abilites (enemies from previous games return in nerfed form, can hit some enemies through walls/platforms, can hit some enemies from afar without activating their attack pattern)
Return of the pointless corridors between areas from SotN (as well as several ripped backgrounds)
Clichéd and nonsensical storyline (main character is extremely gullible) with more silly dialogue, dash/slide/dive kick moves have to be found (normal running doesn’t exist - only the dodge/dash moves), dash move no longer makes you move faster (regular movement is a bit faster than in HoD but still), no forward dash until right before the final area and it's a blue soul ability (so not permanent/toggle-able), a lot of enemy abilities are useless or become redundant very soon, some abilities are overpowered (Lightning Doll, Kahli, Cockatrice), many rooms are just long corridors, 1$ coins, somewhat shorter than both previous games, some blind jumps, new enemies do not appear in already explored areas (see CotM; not having them makes backtracking less interesting), somewhat uneven difficulty (spikes with the most powerful enemies in the game, devils are pathetic), Graham is a pushover, can't press pause to unpause again.. (not even from the main pause menu this time), some dead space and minor dead ends here and there (quick save/sleep sometimes helps), no teleporter in the floating garden area, items drop into place from mid-air when you enter rooms (like in HoD, looks unfinished), no alternate way of dealing with the rabbit (chrono mage), ​the peeping eye (see breakable walls) and shop discount abilites should've been permanent/toggle-able, undine and skula (walk on water/dive) could've been merged since the first one lets you jump into water like you were on a platform that could be jumped up through anyway, high jump is pretty much redundant, some trial & error (where to stand in the waterfall puzzle, some boss patterns),