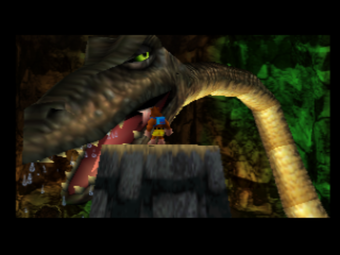 
+
More Platform Adventure/MV-like gameplay (some levels connect to each other (not just the hub area) and you sometimes have to return to previous levels and hub areas with gained abilities to fully clear them - this is optional but can let you unlock more levels sooner making the game less linear, a train runs through each level as you open up its stations and you can call on it from any station after activating it, collecting progress in a level is saved even if you didn't get 100% in a category here, learn new permanent moves and gain transformations along the way which help you reach new areas (the bee and submarine are pretty fun overall and the snowball you can grow or shrink is at least creative; can also play as Mumbo in some levels - he's used for unlocking parts of levels+can awaken a golden giant in lvl 1 which lets you break some walls and open giant gates for a limited time+in one area can heal an NPC), moves/tools (the first two are gained in the first level): FP view egg shooting, ledge grab and shimmy, additional egg ammo types (ice freezes a couple of enemies and obstacles so you can move past (can't stand on frozen enemies to use as platforms though) and puts out certain fires temporarily, grenade blows up some obstacles, fire, there are also remote controlled bombs - kinda similar to Tails Adventure and used both to collect some out of reach items and to take out certain armored enemies from behind); transformations are now gained via Wumba at her hut - can only transform at her hut but can usually teleport to it here)
Double/hover and high jump plus stomp+roll (no movement delay after it here and some of the other moves are a bit more flexible as well)+tackle/beak barge from the get go (super jump from certain yellow pads placed in some spots or from temporary spring shoes)
Optional tutorial at the beginning
Can speed up dialogue (not instant per paragraph/text box though and not all dialogue, can also skip it with l+r+b which works for in-game cutscenes but it's not consistent - sometimes you skip the scene and sometimes you skip one sentence at a time (also can't skip some of the shorter cutscenes like the train one or when using mumbo's magic))
Pretty good bosses overall (good introductions, more than one phase each, you're only required to fight the final one and the returning mini-boss)
Teleporters (tunnel shortcuts and warp points) in the hub area and levels respectively - can only warp to found ones and there's only a few tunnel entrances in the hub area (there are however 2-5 warp points per level; would've been even better if you could gain a warp beacon to let you go back to a warp point from anywhere)
Upgradeable health bar (collect the honeycomb pieces and trade them in at the plateau)
Decent-good dialogue overall (sounds more of its time rather than old fashioned/fairy tale style though, some good humour (fourth wall breaking, meta, silly)),
Can exit unbeaten levels at their entrances or by saving and quitting,
Some sequence breaking opportunities (can pick up some items sooner with the remote controlled bomb robots, can double jump as banjo by jump-canceling out of a mid-air attack (also a bit higher than his high jump), can skip paying the bartender to open up a room, don't need to use the generators in the generator cavern to get to the jiggy there - same with lights in the dark basement room to get that one, tricky kazooie jump to reach the outdoors flight pads in the industries lvl faster, mumbo skip in cloud cuckooland, more with glitches)
Can cause environmental changes in some levels by doing something in the same level or another one (MMX, Wario Land, etc.), some decent-good puzzles (strength bell in level 3, solo kazooie to jump higher with super jump pads, sick dino, atlantis door code, etc), temporary invincibility power up returns (triggered manually and uses up a golden feather every 2 seconds), many hidden items, dropped HP items don't disappear (and eggs shat/shot backwards can be recollected), various enemies talk to you without interrupting gameplay (most tutorial messages also don't interrupt gameplay) - see the prequel however the villains don't frequently talk to you here, temporary speed and wading boots power ups return (the latter let you move through shallow and hazardous liquids and the former let you run on water here), the music still seamlessly changes a bit depending on where the player moves (see the prequel), some nice visual effects (lighting, Animated portraits during dialogue (the animation is so-so though), pretty expressive and well animated character models overall), some unlockable "cheats"/optional abilities (find two mystery eggs and give to heggy+pages and give to Cheato the book+ice key and give to wumba in the hub area; homing eggs, dragon kazooie sidekick (spew fire when standing still (will also scare enemies)+unlimited fire eggs+move between all areas when solo, "kazooie smash" - use her as a club (meh), 2x feather (flight ammo) capacity - meh, 2x egg ammo capacity, no fall damage - should've been default, health regen - very OP since it's fast, jukebox - sound test), clear audio cues from jinjos allow you to find them without seeing them (in the prequel they'd yell but you had to be very close to them already), some new mechanics (can split Banjo and Kazooie up at split-up pads to control either of them alone - used for some puzzles and they can learn a few solo abilities), no lives system=you can use deaths to warp, run up marked walls with the claw clamber boots, surprise mumbo robot fight, some memorable characters (the witches, klungo), some checkpoints within levels (not before bosses though) but there could've been a few more,

+/-
Hub area which is divided into a few parts (gradually opens up a bit more but uses gated progression (collecting and abilities) throughout the game, some minor puzzles and hidden items here as well as some hazards and enemies)
Save and quit feature (can save anywhere, one slot per game - three in total)
Partially non-linear (linear at first - after unlocking level 1 you can unlock 2 more levels by collecting the available jiggies in it and then 2 more levels by collecting jiggies in the next one you enter, can do some objectives in any order inside levels, in hellfire peaks you can choose which boss to fight first and the latter one is a bit tougher), can't use the railroad tunnels without taking the train ("bad things will happen" - lame), sadly you can't choose to unlock a later level - have to unlock them in order, )
New moves are easily gained - you just walk up to tunnel entrances where sergeant Jamjars is waiting to give them to you (need some notes but the requirements are generally low - except for the ability near the cave man in the path between level 1 and level 5 which requires 420 notes for some reason and you only get to know it after getting the split up ability and backtracking to him)
Mini-games (mayan kickball (simple version of football kinda) - pretty easy, lvl 1 FPS maze segment - decent but kinda simplistic (can't jump in these), dodgem/bumper cars - decent, balloon shooting - ok, ring hoops as kazooie - pretty good, ufo rail shooter segment - good but kinda long and fairly hard to get the jiggy, bomb defusal in an FPS mode maze - no thanks (hard to find that last one due to the audio cue not triggering until you're fairly close and it's out of the way, they also try to make you backtrack out of there but you can kill yourself to respawn outside), underwater mine shooting - decent, timed protection segment underwater - would've been better if you could turn faster in FP view, ulcer problem FPS mini-game - too easy, button mashing races vs canary mary - meh (the later ones get frustrating), sewer fps segment - see bomb defusal, barrel gallery shooter - decent, packing mini-game - pretty good, jiggy shooting - easy, bee shooting - the bullseye you need to hit to get to the mini-game is annoying since you can't slow down and the game inside feels is ok but feels more random than skill-based, quiz - pretty random difficulty and the sisters cheat (you also can't know all answers unless you've got 100% completion))
Decent mini-games (collect/eat race, simon says, escort/protect mission of sorts, race, timed memory while harassed by an enemy, board game segment, etc.),
Collectathon (one glowbo for each mumbo skullhouse to be able to switch to him and at each Wumba hut to be able to transform in that level, 20 statues in the FPS maze segment, 5 pages for each book cheat (can skip getting these and the cheats are optional to begin with - see below), some notes in each level to be able to gain the abilities from the sergeant - not a high requirement generally, jigsaw puzzle pieces/jiggies which unlock new levels - lower requirement than in the prequel but fairly high to reach the final area (70/90), rescue mission - 1 jigsaw piece per full jinjo family found and rescued (9 families and each one has 1 more member starting with 1 member for the white family so 45 in total) - mostly optional if you just want to beat the game)
The hit detection is pretty forgiving near platform edges
Oxygen mechanic underwater
NPCs with fetch quests and other minor quests like taking out enemies (most other borrowed Mario 64 elements from the prequel return as does Kazooie)
Less of a platforming focus in some levels - more quest/puzzle/exploration-driven, still can't shoot while jumping (can shoot in mid-air here after getting the ability though) or while walking besides in the FPS segments, ammo-based projectile weapon+flight (also need to launch from certain pads)+invincibility, stereotypical native american depiction (Wumba), skippable intro and ending here however parts of other cutscenes are not, some enemies respawn while in the same area/room, a bit odd how the game shows a game over cutscene when saving and quitting, only 9 levels besides the hub areas but they are open-ended exploration-based/maze levels which are also large and time consuming to fully beat (larger than in the prequel, takes ~14+ hours if you know what to do in each level), invisible walls/roofs in outdoors areas (roofs are pretty much required but makes the world feel less interconnected and open), some mechanics are only explained in the manual (split-up pads for example), mostly basic puzzles but they do add some variety - the "split up" ones sometimes feel tacked on as there's really no challenge and they just take more time than pressing a regular switch, weird noises instead of voice samples during dialogue (generally not bad but can sometimes be annoying), fall damage when falling very far - can often use double jump to prevent it (but not the stomp), ~4-5 second screen transitions (very common), darker and more cynical tone, 4-player MP mode (mini-games only), no new enemies or hazards when backtracking to previous levels for items, features domestic violence against kids (mom on child action), stealth element (pretty rare and basic; sneaking in a couple of segments, destroying cameras to not get detected in another), several minor dead ends where you won't have the right ability to get the item yet if you play the levels in order - going back to these is generally fast but it can be annoying in some levels and the lack of a map doesn't help, clues are sometimes given via signs you have to find rather than from NPCs, can't face robot mumbo while split up and the game semi-spoils him by hurting you if you walk into him, the second to last level (cauldron keep) is just a mini-boss and a quiz game and the last one is just the final fight

​
Notes:
-Skip getting the cheat pages: https://gamefaqs.gamespot.com/n64/196695-banjo-tooie/faqs/9871
-Jiggy hints were added to a sub menu in the remastered ver.
-Remaster also has a stable and higher framerate+somewhat higher res textures and better draw distance 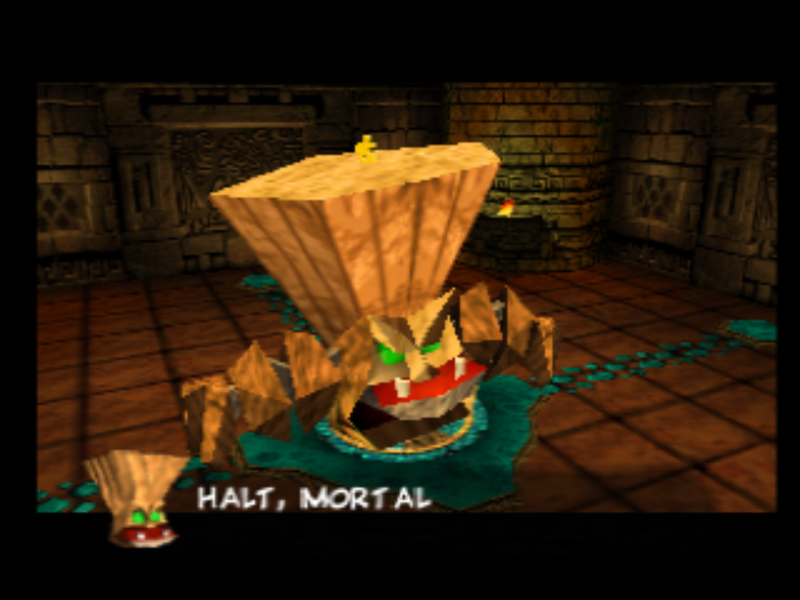 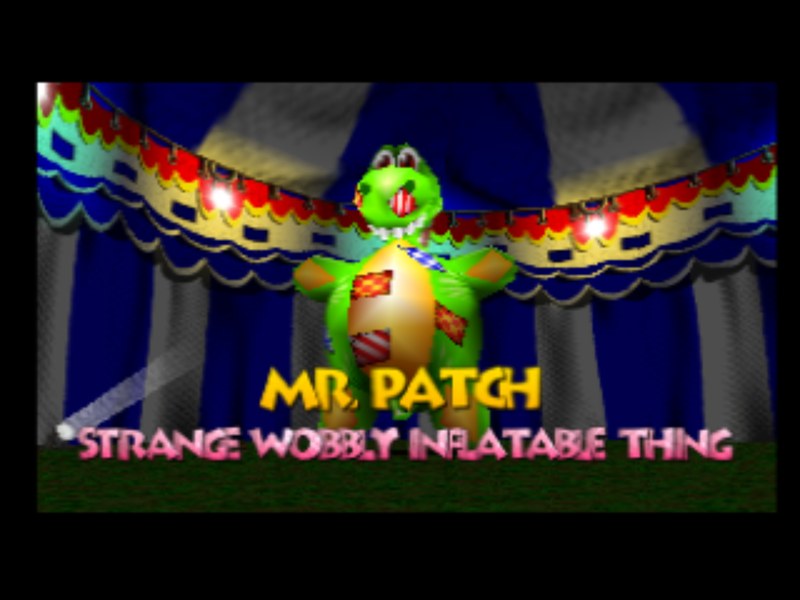 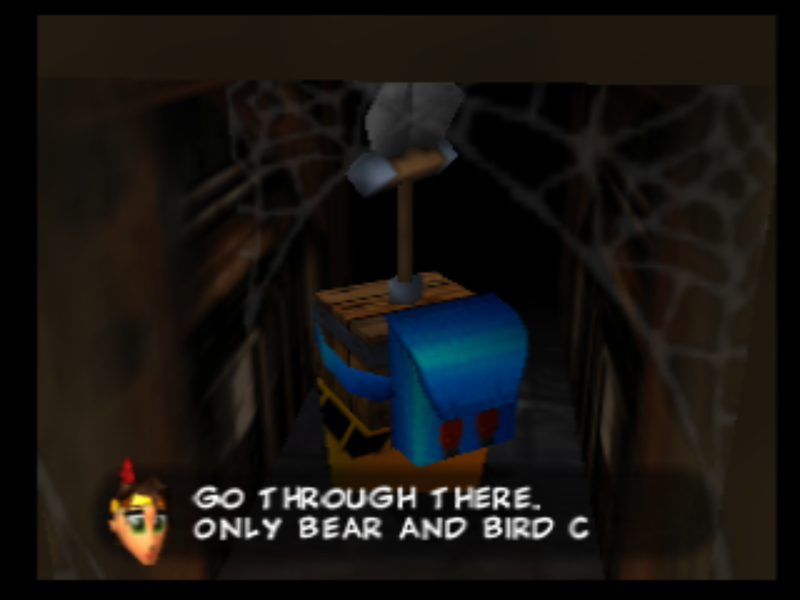 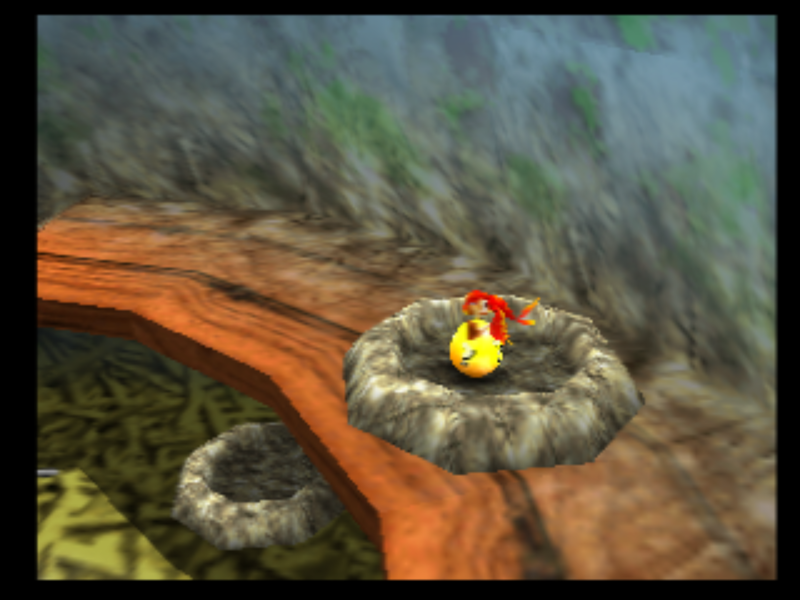 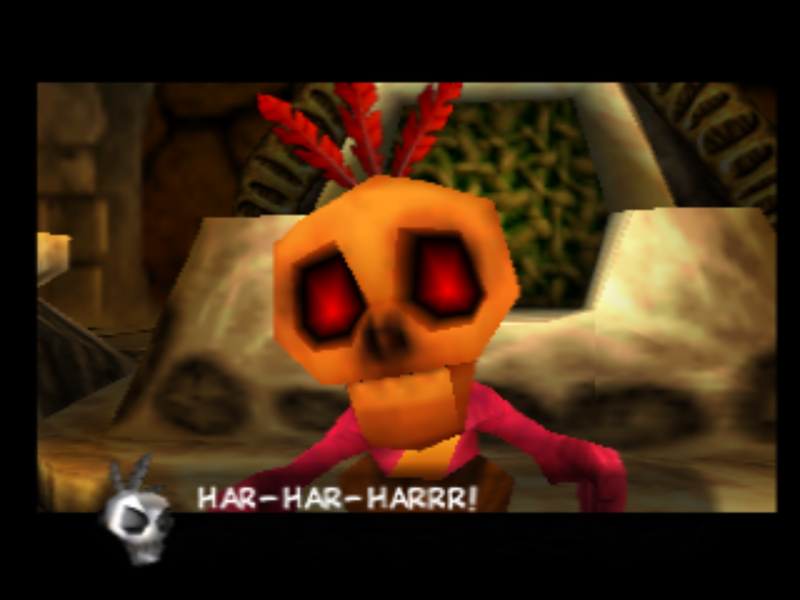 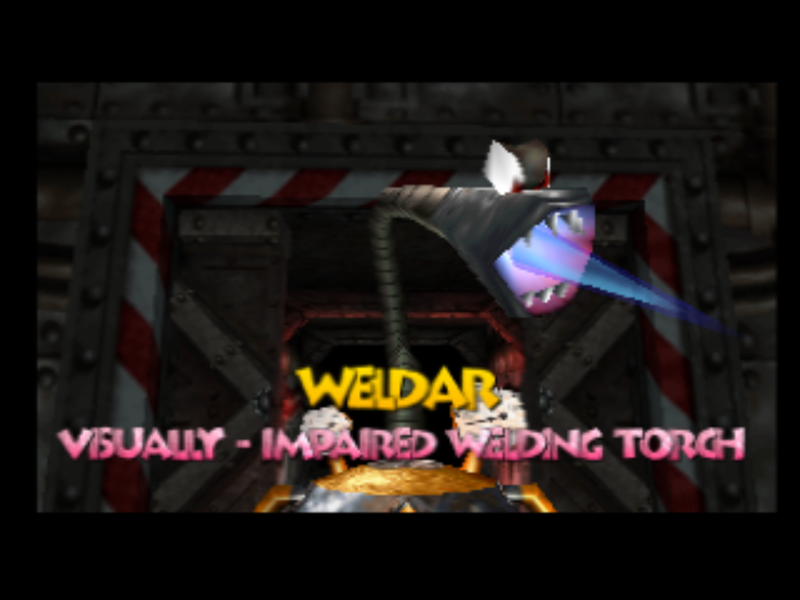