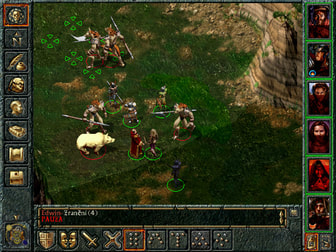 ​
+
Vast game world with tons of content (sidequests, memorable locations and characters, enemies, NPCs and equipment)
Pretty good variation
Tons of interesting spells (know alignment, summon, teleport, mirror image, invisibility, transform, charm, buffs and debuffs etc.)
Party conversations (pretty basic compared to the sequel)
Great dialogue overall (usually eloquent, witty and full of humour)
Dialogue and quest choices matter (though the main quest is pretty much set in stone)
Good environment interaction overall (with some exceptions: tower buildings in some areas and seemingly interactive ladders and item containers which aren't)
Rest anywhere in the wild (at your own risk since you can get ambushed)
In-depth character creation and battle system
Good voice acting overall
Some large monsters, decent moral system (less colorful than in Ultima or Fallout though and some alignments come off as inconsistent or paradoxical) and evil player characters get some unique quests as well as a different set of recruitable characters to mess with, great interface (need to memorize quite a few icons and mechanics though, some things were improved in TotSC), limited spellbook provides a strategic element, formations, some memorable characters (Minsc, Xzar, Jaheira etc.), somewhat comical, dark themes (torture, vengeance, prostitutes, destructive relationships, sexism), on the fly adjustable difficulty, interesting/funny quests overall, vivid modding scene (adds replay value, fixes most inconveniences and bugs - larger item stacks, non-randomized HP growth etc., you can even play the game using the sequel's game engine), save anywhere (except for during battle, in ambush areas or while a spell is in effect on-screen), export your character into the sequel (means you can keep using the same one through two games plus their expansions which makes for a looong quest), widescreen and high res mods, unfinished business mod (attempt at including finished but unimplemented stuff as well as tying some loose ends together storywise), basic AI scripts (character behaviour in battle), auto-save before travelling between areas, teleport and highlight interactive objects codes (need to change the .ini file, still can't highlight item containers though), Durlag's tower (massive optional dungeon in TotSC with some minor puzzles) and the Ice island (small optional dungeon in TotSC with some interesting lore), auto-pause options, speed options this (can mess with voice clip timing if set too high), drink at inns to hear rumours (you can get drunk but it only has negative effects), no point of no return in the final dungeon, some NPCs fight alongside your party, all NPCs can be replaced/removed

+/-
Many fights come down to reloading after a bum rush then trying different buffs/debuffs until you find the correct tactic (basically trial & error, though it's less frustrating when you can save almost anywhere)
Quests given by new party members require that you let them join you (you can ditch them right away afterwards?)
Somewhat overwhelming amount of areas to sidequest in right from the start
Can't avoid encounters on the world map? (Fallout)
Can't switch spells without resting to memorize the new ones
You'll probably need a guide to learn some mechanics (spell combos, which weapon types are the most useful for each game, etc.)
No in-game digital manual
Sometimes permanent death occurs when characters are critically hit (>reload - pointless!, one also can't revive the player-made character)
The main events of the game often don't continue until the player's reached some trigger (good and bad since it lets you do sidequesting but makes it seem like the game world isn't quite alive, there are exceptions though where party members complain about you not proceeding with the next main quest and eventually they'll even leave the party because of it) - having stuff happen without player involment was of course rarely if ever done in RPGs at the time
While you can mix between alignments in your party there will probably be infighting and/or constant complaining
Many high stat benefits can be earned via potions or magical gear (you can even cheat the engine to let you have more spells in your spellbooks?), basic formation system (party won't stay in formation while moving though), change ammo type by right clicking the ranged weapon icon in-game (can only change between three selected types without going into the inventory (unpausing the game), party members can leave and disappear permanently (with the gear they're carrying) if your rep is too high/low for their alignment (neutral characters leave if you try to temporarily kick them out at max rep (20)), Experience cap at 161,000 with expansion installed (can be modded away), huge gaps in the stats where there's almost no bonus or penalty (8-15 strength or 8-13 reputation for example - need to check the manual thoroughly), some unintuitive attribute functions (intelligence doesn't affect dialogue options for example), lack of terrain effects on combat (high/low ground, terrain type, weather), can't see how injured an enemy is (added to EE and the sequel), you can do some questionable stuff without losing reputation in the city of Baldur's Gate, enemies won't follow you outside of the room they spawned in, can't let yourself be imprisoned by guards (only bribe or fight them), the game unpauses when bringing up the inventory screen (doesn't happen in multiplayer (which you can play on your own) so pick what you prefer - having it stay paused is unbalanced at times but makes gameplay more flexible), easy to grind for levels in some areas by resting over and over (getting attacked by respawning monsters)


Notes:
Using the bgtweaks, fixes and unfinished business mods on the GOG version there's a bug where NPCs sometimes won't talk to you (you'll have to re-enter the area or save and reload the game),

Bugs:
-Shar'Teel got stuck on flat ground in an ambush near the Gnoll fortress (needed to move party members around next to her to free her or use the teleport cheat)
- Sometimes can't initiate dialogue with NPCs (re-entering the area or saving and reloading fixes the problem)
-Bragging merchant keeps bragging at the carnival (need to re-initiate dialogue to be able to shop), Thalantyr repeats introductory dialogue
-Crash when picking up the wine and drinking it after killing the Warders in Durlag's labyrinth
-Hit detection problems in the middle room with skeletons in Durlag's labyrinth level 3
-Talking to Varci in Baldur's Gate after saving the boy from the water temple makes him repeat his introductory dialogue and then leave the house (making him disappear and leaving you without a reward)
-Brandilar in BG keeps reinitiating his introductory dialogue tree until you've killed all the doppelgangers in the building
-Can't enter Duchal Palace until chapter 7?
-Party banter only happens once? (Jaheira flirting with Khalid in BG city)
Getting noticed while looting item containers in houses  - The game is sometimes inconsistent about whether or not people will call the guards on you; Sometimes NPCs really should notice you but will let it slide, and other times it's easy for them to notice even without line of sight. It seemed to me like evil characters generally wouldn't notice you, but there could be exceptions there too. Is there a set rule that I'm just not picking up on here?