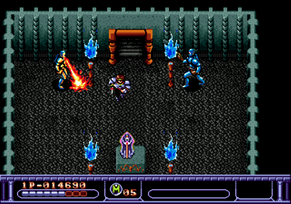 ​
+
Decent dialogue for an action game (though occasionally hilarious because of the poor translation), 4 different characters, good variation, some interesting dungeons, minor RPG elements (exploration based level design, leveling up after each boss, magic items), some good bosses, some interactive dialogue, have sidekicks following you around and boosting your firepower, dark 80s anime atmosphere, somewhat higher resolution than in the SNES version (Arcus Spirits)

+/-
Somewhat easier than on SNES (two more in starting HP)

-
​Heavy slowdown in 2-player and a lot of it in 1-player mode as well, some poor palette choices, loose camera (causes a lot of cheap hits), you immediately use one the health power ups instead of having the choice of putting it in your inventory with the other items (problematic because you don't know what a chest will contain and you might need the health later), the power up system isn’t very intuitive, somewhat unbalanced characters (mage is very weak and has a slow rate of fire), final boss is a button mashing affair, no difficulty options, doesn't use much of the available colour palette, no strafing, block and shot on the same button (different buttons on SNES), some annoying sfx