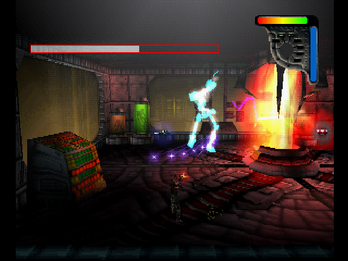 +/- Non-analog twin stick controls (face buttons control aiming) work alright but holding one button to strafe and being able to toggle between firing modes like in Contra: Hard Corps might've been better, voice acting by Bruce Willis (lots of 90s edginess and some funny lines, sometimes annoying though and sometimes doesn't fit with what's happening on screen), can't save health packs for later, ammo-based weapons besides the default machine gun, forgiving hit detection near platform edges, usually zoomed out view, the story references the bible in a pretty obvious and one dimensional way, uses some licensed music and presents it with outdoors cinema screens (cool idea and early System of a Down is featured but you can't destroy the screen and in each scene they're in you'll soon move on - when you do the music goes back to the generic level bgm), duck move (barely used) - moving while ducking makes you roll, rips off the diablo 1 font and ending plus a few elements from Quake 2 (first enemy, some enemy sounds), fairly frequent checkpoints,