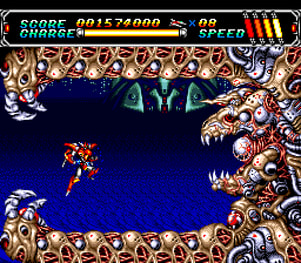 +/-
Powering up to mech form gives you 1 additional HP
No smart bombs
Forgiving hit detection in mech form
Respawn on the spot (lose one weapon level - not too bad but if you do die several times at the level 6 boss or later things get a lot tougher) - until using a credit at which point you'll restart the level
Very short invincibility time after taking a hit as the mech
Some segments borrow heavily from TF4 (some enemy designs and bullets, the space city level), the red/homing weapon's charge attack does little to no damage if you hit the wrong part of a boss with it (but it's very powerful when you hit the right spot),

-
No weapon inventory and not enough opportunities are given to switch weapons in some segments
Somewhat simple weapons system (no gun drones or sub weapons besides the charge attacks, only three levels of upgrades - four for the speed of the charge though?)
Some trial & error (larger hit boxes than it looks like for the purple enemies in level 7, boss patterns, using the right weapon or attack at the right time to take out mini-bosses for example, some cheap attacks)
Sometimes uneven difficulty (the last level is a lot harder than the rest of the game, easy level 4 boss (with the laser anyway))
Somewhat loose vertical scrolling when manually scrolling the screen during a horizontal segment
Cheesy 80s pop metal soundtrack, the green/laser weapon and the blue/bomb weapon are kinda situational (harder to efficiently hit some enemies with and not much stronger than the others if at all), some slowdown in a couple of spots, somewhat lame ending despite some nice art and animation (explains nothing and some scenes are even cut out in the US ver.)