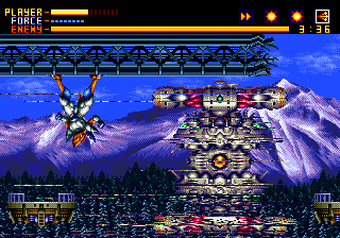 
+
Pretty fast paced and intense action
relatively deep combat system (blocking/converting enemy projectiles into health, dodging, strong full health attack which drains some health, can hang in mid-air)
great art direction (super 90s)
difficulty options
fun weapons/moves (flamethrower, laser, phoenix attack, teleport/dodge, hover, bounce some projectiles back at the enemy)
great bosses overall (large, detailed, varied, they pretty much always take enough hits to let them perform their patterns unless you pull off a perfect phoenix attack (it does more damage the longer you cover the enemy sprite so you should try to hit the boss when it's at the edge of the screen/boss arena), on the fly game speed config (very unusual for a console action game of its time, sort of works like a difficulty adjustment), nice effects (explosions, jointed sprite animations via code, stretch/wobble animations via code, the parallax after the space segment, almost no slowdown), hover in mid-air (also works like a double jump of sorts), satisfying sfx overall, the interface shows exactly how much damage a boss attack does to you, you can shoot weapon power ups with a certain weapon to make them cycle to that weapon immediately, change targeting modes (down+a; they should've included a contra/gh-style one though where you could move freely and shoot), interesting health/special move dynamic - block enemy shots to create health (so you can keep using the phoenix attack), dodge/dash move (through enemies and bullets), walk on the ceiling (happens automatically if you jump towards one), upgradeable life bar, interactive control configuration

+/-
Almost every enemy drops health (need to have full health to perform the phoenix attack)
super short stages
jumping down through platforms overrides the phoenix attack (takes some getting used to)
limited ammo (however it replenishes slowly while the weapon isn't in use)
slight movement delay after dodging/dashing on the ground (not in mid-air unless you reach the end of the screen) and when turning around while moving
the avatar stands up temporarily if you block while crouching, can't cancel a dodge/dash half-way and dashing doesn't affect jump length, flame and lancer are stronger than the other weapons (though the former only works against organic enemies and the latter can be hard to use efficiently), shots are cancelled if you take damage durin them, very short stages, complex controls to learn right away (you start with every move and weapon available),

-
No six button support or control config (would've been best to have the phoenix attack and the block move mapped to their own buttons and to be able to cycle between weapons using two buttons instead of the wheel (or they could've let you pause while changing))
can't choose to simply fall from a hovering position (pressing down triggers the dash, pressing jump/c makes you jump upwards)
somewhat uneven difficulty curve (safe spot on the spider boss, green dragon/sylpheed force and the inal boss are fairly easy)
​can't skip the boss intros (can take up to ~8 seconds and it happens frequently though not all bosses have intros)
some trial & error (some patterns, air (dragon/sylpheed force, elevator before the final boss - you're pulled to the right and downwards, respectively) and water physics (a stream drags you around)
no weapon power up before the last form of seven force (fire-based weapons (homing/flame/phoenix force) don't work underwater), phoenix force is triggered simply by pressing jump while in the shooter stage in space, need to use the block move (or out of ammo attack) to damage the final boss), slightly sloppy hit detection at times