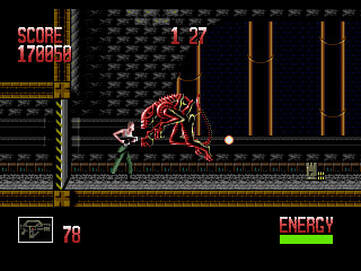 ​
+
Some fun weapons (grenades, rocket launcher, flamethrower), weapon inventory
Pretty fast movement, fast ladder climbing
Pretty impressive music overall, satisfying sfx
Basic ranking after each beaten level (bonus points for saving up on ammo, points for each prisoner saved - have to save all of them anyway..., time taken)
Some destructible objects (exploding barrels - can cause chain explosions, regular doors)
Difficulty options (3 levels, number of lives - up to 9) and basic control config, some hidden shortcuts, pretty good mid-air control (can slide onto a platform below a wall),

+/-
Level timers
Rescue mission/collectathon - have to save every prisoner in each level
There's a radar feature but the range is so short that it's almost useless for spotting aliens while moving - means you generally can't get a good flow going
Falling into fans and spikes only damages you a little (like falling into pits in Zelda 3)
Grenades don't explode on impact - instead they're on a short timer so can generally only be used from a safe spot
Maze levels, no mini-map, the aliens are pretty dumb/basic (they don't form groups, they can't hunt you between rooms, the ones moving vertically on walls can't move out of that vertical path to attack you) - it's more of an arcade-style action platformer, can only cycle the weapon inventory one way (this was released before the 6 button controller), fall damage if you fall for more than about a screen's length, can't shoot while moving unless you're using the machine gun, some resource management (limited ammo for all weapons), can't save health packs for later use - some times can't avoid picking one up and it's used even if you had full health, no save or password feature (there is a level skip code though it requires plugging in a second controller), grenade blasts are rather small, can hit enemies and bosses from off screen, no enemies in level 8

-
No continues even on easy/cadet (!) and no checkpoints
Various cheap hits from level 3 onwards (surprise attacks from above or as you're entering a room - sometimes when you're on a vertically moving platform so you fall down and have to get back up again)
Some control issues (get knocked down for over a second every time you get damaged, if you take a hit and are knocked back into a slope then there's no invincibility time, can't turn around in mid-air, some delay before you can shoot after landing from a jump, clunky movement near ladders - tricky to get off and can't get on if you're in front of one rather than to the side of it, can't jump off of or onto ladders, some delay when turning around during movement, some delay before shooting with the rocket launcher, can't shoot straight upwards unless on a ladder, can't shoot diagonally upwards nor downwards with the rocket launcher - why?, can't shoot sideways while on a ladder, can't hit exploding barrels with the flamethrower)
No level maps (they look pretty samey so it's fairly easy to get lost)
Dead ends are fairly common
Some waiting for moving platforms, some aliens sitting still on the ceiling just let you shoot them from afar without reacting, some poor color choices, barely any story at all, somewhat slow crawling and you can't crawl outside of the shafts, some trial & error (one way slopes and you automatically slide down if you land on them, sliding too far in the one way slopes damages you - have to jump into them to avoid it), repetitive level design and backgrounds after the first three areas (also repeats basically the same boss in a different room layout until the last one where you face two of them (would've been cooler to face the queen) - decent but can be exploited and trying to fight it normally it seems impossible to avoid damage due to some of the control issues),

​
Survivor Mod:
-Time runs more slowly
-The radar does not need batteries
-Health packs restore all your energy
-The loaded ammunition totals have been changed. Less ammunition at higher difficulty (hence the name of the game)
-Some texts were changed (?)