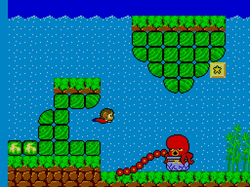 -
​Janken (predefined patterns though so you can be prepared after the first game)
Some trial & error
Can't de-equip items (and you lose equipped ones after beating a level)
Vehicles are auto-used after buying them
Mostly generic looking enemies
Sometimes sloppy hit detection (octopus, bear, inconsistent on the top of ladders in the castles),


Comment:
Sure, it lacks the pick up and play quality of SMB since the the controls will take some getting used to and Alex dies in one hit. And Janken is kind of annoying (until you know how to deal with it). Still, this is far from a clone and quite an ambitious game for the time, featuring a character inventory, vehicle riding, and shops where you can buy some really unusal gear with the money you've acquired in its stages. There's more of a sense of a cohesive adventure thanks to the map and dialogue sequences than in the average platformer of its time, and you can even change the outcome a bit by taking different routes. All in all, a great game still worth playing. For ALL KINDS OF KIDDS.