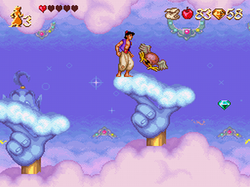 + Password save feature, mini-game (roulette, carpet ride over Agraba), better realised end boss than in the MD version (though it is easier), nice cutscenes, better character introductions in-game, extendable health (collect 100 jewels or a heart), acrobatics and hover jumps - Aladdin is a bit more true to the movie here, take detours for better items, unlockable special ending (get 70+ red jewels),
good animation overall (not as good as the MD game, lava cave and boulders are the only exceptions)

+/- Lose the parachute after continuing, falling into lava isn’t instant death (you bounce once so there’s a chance to move onto a nearby platform), Aladdin can’t swim, apples as your only weapon besides acrobatics, parachute makes things much easier during the last levels the game

- Some trial & error (boss patterns, skeletons, cave trap, falling boulders  and stalactites can be grabbed and bounced off of), some control issues (break animation even when not running, Aladdin takes an extra step after releasing the buttons when running – even after having just landed after a jump, Aladdin breaks after just a couple of steps of running even after jumping, stiff and limited swinging controls compared to Sonic or Lion King (when grabbing something the game always reverts Aladdin as far back as possible in the swinging move, can’t jump backwards), slight delay in movement after falling from a long enough height (land animation), can’t look up/down (leads to some leaps of faith, however the parachute helps), some tedious platform sequences (genie’s lamp - lots of pits, treasure cave - leap of faith), no difficulty options, can’t map the apple throw to L/R, not as true to the movie as the MD version (Capcom style visuals, Aladdin touches treasure in the cave, some remixed music), get enough jewels and you receive maximum possible life which means there’s no need to collect hearts, lack of bosses in some stages, pretty easy final stage, some slowdown during the Jafar battles, item containers have an annoying way of throwing their items out when you open them (breaks flow), short (six stages), somewhat repetitive (repeats the guard enemies and similar platforming challenges a few times), sound quality is not very impressive for SNES standards (low quality samples and reverb), poor hit detection on the lava river (chase sequence)


GBA ver.: Adds two new segments (one in genie’s lamp, one in final stage), slightly tighter controls?, doesn’t adjust the sprites to the smaller screen size, replaces the passwords with a save feature