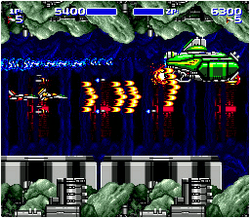 ​
+ 2-player, difficulty options, homing missiles, good enemy variation, speed tunnel sequence, some good bosses, respawn on the spot even when losing a credit (you lose all shot power though and it's hard to recover later on), decent art direction

+/- Collect money for no other reason than extra points, sometimes hard to differentiate between everything in 2-player (most parts are a bit easier though)

- Sloppy hit detection (mostly too forgiving), heavy trial & error (enemies/attacks are sometimes too fast to dodge – sometimes need to know when to use a bomb beforehand, boss patterns), vertical speed is slower than horizontal speed, can't adjust ship speed (and it's too slow), hard to recover if you should die later on, smart bombs need to be charged (can't shoot during this time) and only take out small projectiles and small enemies, very hard to get the power ups you want (most of the time) since they drop off screen, controls on levels 4 and 5 leads to difficulty spikes (can't stop - whichever direction you push the ship keeps moving in), somewhat short (6 levels), uneven difficulty curve (boss 2 goes down too fast, pretty easy final segment and boss), mostly weak (PSG) sfx, sometimes hard to tell if you're damaging an enemy, some distracting backgrounds, lame ending, doesn't make good use of the MD sound chip (no drum samples, no PSG harmonies, some abrasive instruments)