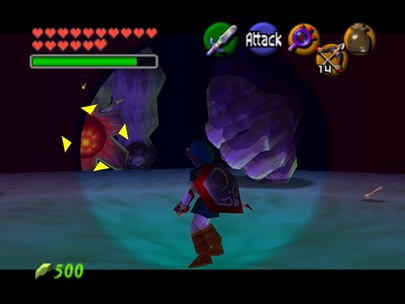 
​
+
Z-targeting (a fairy (navi) locks on to enemies when nearing them, can strafe while it's locked on and keep facing the target)
Some good puzzles (forest temple's twisting rooms and falling roof with holes, light reflection in the spirit temple, floating platforms in the water temple, ganon's castle, using one chicken to hover jump to others in Kakariko, you can find skulltulas by listening for them) More distinct dungeons throughout than in ALttP
Pretty nice ambient design (you can hear which location certain creatures are in and battle music starts and stops dynamically when near enemies)
New friendly race (Gorons) and the Zoras (who are good here) have more personality and lore
Much more expressive characters
Satisfying feedback from attacking enemies and from bombs
Walk or run based on how far you pull/push the analogue stick (Mario 64?)
Music element to gameplay (play three notes of a song on an ocarina to cast spells, unlock doors or contact certain NPCs - no regard to beat or length of notes but still pretty cool (see Monster World III (MD) for an earlier example), you can also make your own short ditty and record it as one of the songs (Scarecrow song))
Horseback riding (about a third of the way through) - can shoot arrows while on it and there's an archery range mini-game using the feature
Context sensitive actions (pushing/climbing blocks, reading signs, climbing ladders, entering narrow paths/holes, etc. - Zelda 3?), warp magic (dungeons only) and warp songs (dungeon entrances, temple of time), time travel element (kid/adult time periods, plant seeds as a kid and then use the grown plant as an adult to reach new places, spirit temple entrance) - unfortunately you can only travel back and forth in the temple of time (should've worked like in ALttP), new responses from NPCs when equipping masks (some say the same thing though) as well as small hidden bonuses, some sequence breaking through more advanced techniques (bomb jump, invincibility frame jump (go through firewalls), longer jump by rolling before jumping and then attacking mid-jump?) - plenty more using glitches, if an arrow passes through a torch it is set ablaze, more interesting hookshot uses (mainly due to the 3D level design), scarecrow song can be used to spawn a scarecrow (to hookshot swing to) but only in certain spots (some places where Navi moves to and turns green but you can't "check" with the A button), new things to catch in a bottle (bug and poe/ghost, blue fire; no bees though), ice floe physics (Mario 64), more open ended structure after becoming an adult and beating the forest temple (gerudo fortress - after epona (don't need to beat the forest temple?), bottom of the well - after time travel, water temple - after iron boots+bow, spirit temple - after longshot+bow, shadow temple - after lens+bow+fire temple (and longshot?), gerudo training - after longshot+hover boots), new gear (hover boots, iron boots, underwater breathing (blue tunic) and heat resistance (red tunic), lens of truth (shows fake walls and invisible paths over pits), longshot (hookshot upgrade), manually aimed mirror shield, stick (limited torch), ), some dialogue choices besides yes and no answers (can't say no to major friendly NPC requests and keep going though - why include the response then?), some good bosses (ganon's second form, phantom ganon, twinrova's second form, iron knuckle, dead hand, barinade, bongo bongo), cool escape sequence before the final boss, nice boss introductions, nice ending cutscene

+/-
Respawning bushes (makes some of the game easier when you can farm for hearts though it takes some time)
Can't attack NPCs
Navi can't lock on to certain enemies (golden skulltulas)
Very linear structure in the first third of the game
Can't light sticks on certain torches
Day/night cycle (some enemies appear at night time only, sadly there's no option to quickly wait/rest until morning or evening (leads to some parts early on where you're just waiting around doing nothing - pretty soon you'll get a song that lets you skip ahead to midday/midnight but you need more exact timing for several quests)) - a full day is just a few minutes long in-game
Need certain items before you can buy items that you can find sooner (bomb bag for bombs, bottle for various stuff, bow for arrows)
Pretty obvious clues to some puzzles (sneaking into the castle, finding Saria in the lost woods, convincing the Goron chief, block puzzle in the forest temple (arrows on the floor))
Can't shimmy along platform edges
Loading puts you back at Kokiri village (or at the beginning of a dungeon?) until you're an adult (there's a shortcut between it and gorgon's city and zora's domain but still)
easier laser eye traps, can't blow up various objects that are weaker than stone (and you can only blow up certain rocks blocking your progression), can't dive from land unless from a greater height, fall damage from great heights (unless you hold the jump button to roll - if there's no space in front of Link to roll on then you'll still take damage), annoying shield destroying enemies (can't get it back if a firebat hits the wooden shield - need to buy it back though there is a shop in the first dungeon you meet them (dodongo's cavern) and an extra one in the other one (below the well)), a bit odd how soft soil patches are also used to lure out more gold skulltulas with bugs, can't visit Hyrule castle after meeting up with the princess (you have a letter, the royal song and Impa guided you out earlier), pretty easy to get money/rupees (castle drawbridge chain, sell bottled bugs in hyrule market, sell poes as an adult - less efficient for some reason), time travel element could've been more developed in dungeons, no non-dungeon use for the gorgon tunic, underused hammer item (you can smash harder rocks and make regular enemies fall over with it but it's not used in a particularly interesting way in its dungeon - could've been used to fling something into the air using a teeter maybe? (or for a wack-a-mole mini-game)), the golden skulltulas are too easy to kill, Dark Link is too easy with the hammer and kind of cheap without using it or Din's Fire, stalfos in the forest temple can walk on air and you don't need to bomb them to kill them, need a rumble pack to find some golden skulltulas (stone of agony makes the controller vibrate when near some secret areas), it's posible to get all gold skulltulas from one spot by using a glitch (under the lone tree at Hyrule castle - play the song of storms to get there), the giant's knife isn't worth it (breaks after just a few hits even after upgrading it), can't win the race against the running man, some gore/horror elements (blood and torture devices in the bottom of the well dungeon, re-deads), middle eastern symbols representing the gerudo?, song of storms could've been an alternative to the lens of truth? (the rain), many NPCs stand in place without really doing anything, need the goron bracelet to pick up bushes/weeds while you can pick up small rocks by default, very easy ice cavern boss/mini-boss, silent protagonist (a bit akward when NPCs reply to things Link says that the player can't read), rooms reset when exiting them, odd that you meet cows in hidden caves, some recoil when smashing things with the hammer, no bees in the beehives?, enemies tend to attack one at a time, pretty silly that the gorgons are starving because they're picky about which rocks to eat, longer dungeons overall, some segments are timed (some training ground rooms, some puzzles, mushroom delivery), missing gear and spells from previous games (raft, cross (see eye ghosts), ladder, magic key (fits all locks), magic cape (invisiblity/protection vs spikes); jump, life (healing), fairy (transform into a fairy - could've been used for controlling navi and scouting), thunder (smart bomb)), optional ice arrow (can't stand on frozen enemies),