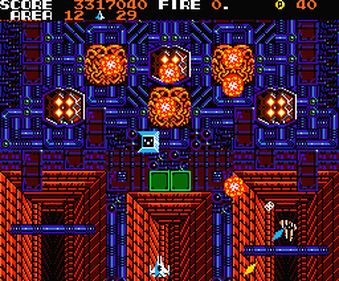 ​
+ Large special weapon arsenal (8 different kinds) with 3-6 (depends on the weapon and weapon 5 can turn into a different weapon (the laser) with its own levels, 6 for the standard weapon but it can only be reached normally if you use special weapon 0 and there's no upgrade between the 5th and 13th power chip you collect - the other ways of reaching it are crashing into boxes containing power chips or shooting the Eye Eye building (appears in lvl 3, 5, 8, 11, 12) with the standard gun) levels of upgrades per weapon, intense action, respawn on the spot without losing all weapon power, mini-bosses, smart bombs (they trigger when picked up but you can let them hover for a while, weapon 6 also shoots slow moving smart bomb style projectiles - however these will destroy power chips), some hidden items (fairies - acts as a smart bomb when appearing and sticks around to destroy the next boss, also lowers the difficulty), the enemy AI gets more aggressive/difficult depending on a few factors (weapon power (weapons 2 and 3 increase enemy aggression more), how many enemies you kill and how much you fire, how long you stay alive, if you fail to destroy a base within the time limit; using weapon 6 and smart bombs decreases aggression), smooth scrolling, two special weapons also serve as a shield, long for a shooter (12 levels), can upgrade your rate of fire several times (red lander - shoot blue lander (very rare power up you can get from the sander ships) until it turns red), can see which boxes contain a power chip in this version by shooting it a couple of times, can destroy enemy projectiles with certain special weapons, decent final boss (three forms), different backgrounds compared to the NES version (generally a bit better)

- No checkpoints?, no speed upgrades (the ship is a bit too slow to dodge some attacks without memorizing), slowdown and flicker, uneven difficulty (sometimes nothing happens for several seconds), too hard to obtain weapons after level/area 3, trial & error, repetitive (all main bosses are bases, no environmental hazards, repeats most enemies a lot), no difficulty options, need to reset the game to completely reset the AI level if you want to start a new game while the game is on, weapon 4 sometimes gets stuck on the top of the screen (needs to hit something to be shot again), hard to recover after death towards the end,


​Comment:
Upgraded version of Zanac with smooth scrolling and nicer backgrounds (the NES version still has the better sounding music though). This game is pretty innovative for the time with its adjustable AI depending on your actions, unlimited (?) continues and interesting if obscure mechanics like crashing into certain item boxes for faster main gun upgrades. But I just found it too repetitive and long, and that it was too hard to recover after dying towards the end.