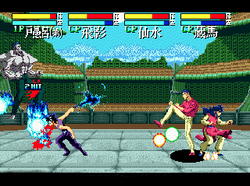 
Comment:
Growing up we used to play a 3-player fighting game called International Karate+ on a buddy's Amiga all the time, and we loved the sheer chaos of it. So when I discovered this game had the same feature I had to play it, and I was not disappointed. Matches are never as fair or precise as in SF2 or something, but the laughs from unintended results and the fun in temporary alliances make up for it.