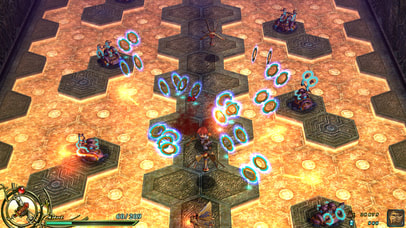 
​
+
Sometimes interactive dialogue (can ask about a few pre-defined subjects and sometimes asking about one thing unlocks a new subject - not interactive on the same level as western RPGs or Adventure games)
Pretty fast paced action
Character portraits during dialogue (no animation or voiced chars though? see Ys IV)
Jumping with up- and downstab
Basic attack combos
​Nice intro cutscene, 64 save slots (location, time, stats), hidden chests, speed up dialogue on a per paragraph/text box basis, enemies now drop consumables, fairly interesting premise (adol gets washed up near a secluded island village with people of another race/species (Rehda) who have some bad history with people and needs to gain their trust; other washed up people have set up a village near theirs and there's an unresolved problem of the bridge between their islands having recently been destroyed (as well as an artifact being stolen from the Redha) causing suspicion between the races), 360 degree movement and pretty good mid-air control, optional bosses (the overworld mini-bosses are weird though in that they're too hard until you finish the limewater cave and then they're too easy and only one of them gives a good reward), large and fairly detailed bosses (which aren't pre-rendered), basic map item (shows your general location and a vague layout of the islands and area locations), difficulty options (normal/hard/nightmare, no easy mode), this version includes the ability to warp between visited save points (wing of alma item in second dungeon), hitting enemies recharges a sword's special attack (rewards more aggressive play), pretty good bosses overall, some strategy in picking the right accessories for a given situation,

+/-
No block or dodge move
Save points (pretty frequent but considering how quickly you can die it can be a bit more frustrating to play than some earlier games where you could save anywhere outside of boss battles)
Can't access the inventory during boss fights (some fights are surprises but if you die you can at least choose retry and get back lost items and you can escape mini-bosses) - only use one type of item as a quick slot item
Limited inventory (9 of each consumable)
Can't change the camera angle (sometimes changes angles automatically to show more of a certain area)
No health regeneration from standing still in outdoors areas or towns unless you get an optional quest item (but it's only accessible late in the game), only three swords though they have somewhat different slashes and different magic attached to them (fire/wind/lightning element) - they can also be upgraded using crystals you'll collect throughout the game, PS2 version has 3D models but they aren't super deformed/chibi, catastrophe mode (healing items are replaced by permanent stat upgrades that are very expensive), silent protagonist, the game world's continent names are heavily based on the real world (kinda lame names - Afroca for example), the two main female characters can't defend themselves at all during the escort mission on the Romun ship (doesn't make sense considering they could move around on the islands before) - also can't play as either of them, lack of puzzles, can't escape main bosses, the optional mini-bosses are replaced by stronger versions in the late-game (better fights and they all give good rewards but it's easy to miss that it happened at all, majunun (the one in the ruins) is also way harder than the others and will require a bunch of level grinding), one point of no return near the end, ​

-
Unskippable cutscenes
Start with no money
Grinding for money early on (consumables are pretty expensive) and emelas later on (for sword upgrades)
Pretty easy final two bosses (lvl 50, 2/3 maxed out swords)
No journal/quest log feature
Mostly uninteractive environments, some control issues (weird how some regular enemy attacks take priority over the lunge attack or attack combo, the lunge forward attack is tricky to pull off consistently (need to attack right after stopping with precise timing and you can't have walked more than a step before stopping, harder to do diagonally), no jump height control), very short invincibility time (can die very quickly to certain enemies that you wouldn't expect to die to - for example the dropped enemies in the plains north of the human village can slow you down and then quickly take you out in a few hits), some backtracking still, no climb animation, the character art is somewhat worse than in Ys IV or the Complete/Chronicles+ remakes of 1-2, still can't sell gear, an annoying bird enemy can steal a decent amount of money from you and then quickly fly away, trial & error (finding the pikkards that wandered off, there's a limited number of capla waters in the game, can search some bodies but not others on the romun ship, some projectile attacks from off screen, 14 missable items (5 of which are minor stat upgrades and one of them can be bought later), some super tight jumps (third dungeon/ruins) considering how tricky it is to jump consistently), while you can stray from the path early on the game uses hard gating so you can't even damage the enemies and die in 1-2 hits, some tedious parts where you'll have to redo a longer segment if you fail a tricky platform jump (limewater cave mid, black tabula - the tabulas are optional but getting all of them unlocks an item that prevents all negative status effects), no dungeon maps (gets especially annoying the limewater cave), some trial & error (finding the black tabula (need to use the rainbow item at one point in the ruins - no clues), sometimes you'll want to exit a room normally instead of using the wing to trigger the next event (Dogi smashing through the wall for example), ), slow magic regeneration prevents sword spells/special attacks from being all that useful until the late game (unless you get the eldian orb sooner than you should in the ruins), new armor doesn't show on your avatar (Diablo), some plot oddities (the good guys never bother to stop and question the black-haired guy or talk about doing it until the late-game, Shia won't warn you about the Romun invasion even though her visions were shown to be useful earlier, the Romun occupation force lets you go into town and talk to people), kind of dated graphics (looks more like a late 32-bit era game with its pre-rendered models and kinda basic 3D environments), somewhat glitchy hit detection near walls and invisible walls at times makes adol float slowly downwards in mid-air if you hold down the jump button,

​
Bugs:
-The game gets stuck right as you board the romun ship (PC GOG version, Windows 10) due to NPC allies no being able to climb stairs here - for some reason a workaround is to take screenshots as it makes the character move while the game "freezes" for a second while the screenshot is created (the bug happens again during the escort mission on the ship),
-Noticeable humming during quiet parts when using headphones and unplugging them and plugging them in again causes everything but the humming to go silent (Windows 10)