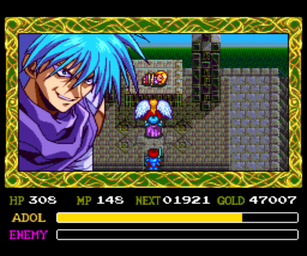 
​
+
Very nice cutscenes and dialogue scenes with a late 80s/early 90s animé style
Diagonal player movement (not diagonal sprites though) - enemies don't have it so basic combat is easier
Voiced cutscenes (decent-good even if exaggerated)
Pretty fast movement
Can speed up text on a per message box basis
Message speed and experience stat options (show current total or points needed for level up)
Save anywhere outside of boss battles (5 slots with current location names)
Allied cpu in some scenes which is pretty good at fighting
Very good bosses overall
​Nice weather effects at the big tree
The spells from Ys 2 and rings from Ys 3 return, can escape from boss battles (only some this time though, they'll regenerate fully), monster transformation is kind of OP (barely drains any MP and lets you avoid all regular enemies), warp to previously visited villages with warp magic this time (you get it about halfway though), npc dialogue is updated when revisiting villages after getting warp magic, some interesting level design (quicksand segment, ruins of no return fire trap room, swim in monster form, fool romn fort guards by equipping the same level of gear as them, basic ingredient mixing at one point to make an item needed to progress, escherspace dungeon puzzles),

+/-
No block or dodge move
Same basic combat as in Ys 1 and 2
Quickly respawning enemies (good for grinding, can be bad when trying to escape an area)
Regenerate health by standing still in non-dungeon areas (doesn't work in some scenes like the prison escape though)
Strong and independent female party member
Chiptune music in towns (it's very good though)
Can't decide when to take a cpu ally with you for a quest
Can only carry one herb at a time
Revisit locations from Ys 1
Silent protagonist
Pretty easy to get yourself killed quickly in tight areas (no invincibility time and pretty short knockback), pretty forgiving checkpoints (spawn before bosses if you die at them), only one chest key needed for all locked chests, can't re-check item descriptions of items you've already bought (get the descriptions in shops), final boss dude isn't revealed until you actually fight him, the hidden "best" gear can't be used against the final boss, seeker magic is just a nerfed moon mask effect, player avatar auto-corrects its movement when bumping into walls instead of stopping (can screw up your positioning in combat)

-
CPU allies steal your loot & exp and they're strong (Carna kills enemies in one hit in the lava cave) - however most dungeons are tackled alone
Tedious action puzzle in the golden city dungeon where you need to escort a cpu ally through a trap segment that can kill either of you in one hit (and you get a game over if the ally dies) and then avoid some enemies that pull you down one floor (forcing you to backtrack for a couple of minutes AND redo the death trap puzzle albeit on your own this time - invisibility via potion also doesn't help here)
Can't sell equipment (only jewelry at the trading post about halfway through the game)
Can't open or knock on closed doors in towns
First fetch quest mimics the first one from Ys 1
Some money grinding to get the most recent equipment and some level grinding to be able to damage the bosses properly (the scaling here could've been better - it goes from near impossible to medium difficulty from just 1 level up)
Some trial & error (poor directions for the surfaced golden city location, need to have the el doran equipment and the moon mask equipped to damage the final boss, crappy visual clue for the interactive crack in the wall in darhm tower (lots of other cracks in the tower area), no usage explanation for some items, need to press start to use a selected item such as the herb)
Too much focus on mazes and hack 'n slash gameplay
No subtitles during voiced scenes
Some backtracking (dead ends and dead space here and there, no chest key in the dungeon with the first locked chest)
Uneven visuals (pretty basic in-game graphics overall but with some nice animations and background details here and there), overly drawn out golden city dungeons (except for the very short final one)some typical JRPG in-game cutscenes where your character is abused without you being able to do anything and some NPC ending up saving him/her instead, no journal/log book feature, mp regen is very slow, kinda tedious invincibility times on some bosses (ice mountain), some unavoidable damage (can warp into enemies at one point, some boss attacks?), several levels of grinding required before the final boss since you can't use the herb or a potion (just the elixir; beatable at lvl 49 though)mostly pointless dialogue yes/no prompts, save slots don't show time spent, super limited fov and no map makes it hard to navigate the mine, can't access the inventory during boss fights, first boss is too similar to one of the bosses in ys or 2 and the first dungeon too similar to the one in ys 1, some of the dungeon music is a bit unfitting (overly saccarine giant tree dungeon track, cheesy saxophone in the ice mountain area track), some underdeveloped letter dove system (can't call on cpu allies - used for tips and some items instead), some plot oddities (pretty stupid that you get ambushed by a small army with a cannon at the entrance to the golden city wihout noticing, can re-equip different gear after getting into the Romn fort and still fool the guards, what's Karna doing for half the game?, shouldn't Adol be able to warp to minea (Ys 1 town) straight away?), somewhat looser scrolling when walking north, minor slowdown at times, unskippable cutscenes,