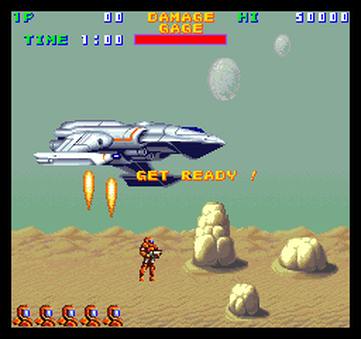 
+ Choose your own path (hub map with level (planet) select), double jump (can only do it as you're moving upwards though), mixes run 'n gun and horizontal shooter gameplay, difficulty options (4 levels (Easy is default), lives per credit (up to 6), coin worth (up to 3), timer (fast or slow), point intervals for extra lives), mini-bosses on some planets, scrolls both horizontally and vertically, some large sprites, move while shooting, some decent bosses (desert planet), escape sequence in the final level,

+/- A few checkpoints per level (2-3?), some initial planets are harder than others, level timer (1 minute - fairly short but it resets at checkpoints), can't move backwards in a level, power up carrying enemies run away after a couple of seconds (they disappear when off screen), can crouch and lie down (but not move while doing it), no health drops, no dodge/strafe/run moves, respawning enemies,

- Plenty of slowdown (silly amounts in the shooter segments and final level), no mid-air jump control or jump height control, weapon upgrades don't carry over to the next planet, no auto-fire, can only shoot forward (some upgrades shoot at an angle but it would've been helpful with so many flying enemies), take much more damage from touching most enemies than from their shots (some kill in one hit), can't tell the difference between power ups?, no weapon inventory, looks pretty generic overall, mostly bland and repetitive shooter segments (they're short though, a couple of them have core type bosses), trial & error (some levels throw a bunch of enemies at you at once at points so that you have to slow down a lot or get hit, boss patterns), so-so use of the YM2203 (x2) sound chip overall with mostly scratchy or tinny instruments (some good tracks though), reversed slope physics, no music during one of the boss fights, some dead space in the blue and red planets' shooter segments, loose vertical scrolling,