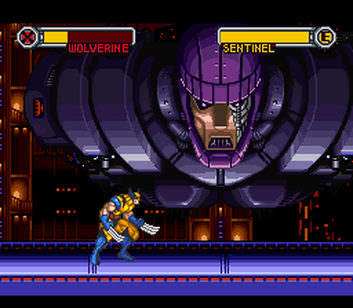 *depends a bit on the chosen character

​
+ Pretty good variation, quite fast paced despite not being able to run, 5 different playable characters (Cyclops, Psylocke, Wolverine, Gambit, Beast), decent move list, some large and detailed bosses, training mode (can’t finish the game in it, doesn't teach you moves and there are no real difficulty options), pretty good animation and art direction, decent-good cutscenes and stills between some levels (only the ending is animated though), nice in-game cutscenes when levels start showing character entrances (can't skip them when they're repeating though), wall climbing (Wolverine) and ceiling climbing (Beast), choose in which order to tackle the first 6 levels, enemies will sometimes hit each other with stronger attacks (grenades, lasers), different final level depending on who you choose to play as, pretty satisfying sfx overall

+/- Can't move while attacking (Cyclops)?, hadouken button combo as an alternative to shooting Cyclops's laser (pointless?), obvious street fighter and streets of rage influence on move list (gameplay is more like Ninja Warriors), no charge attacks?, no overall time limit, no run move (the forward charge attacks sort of work like a slide - F(orward), F, Y to use for most characters), can't use Psylocke's special in mid-air?, several moves are pretty basic and could've been mapped to their own button - you even lose one of the moves mapped to a button after the training mode, while the levels are described as missions you really just beat people up in them, Psylocke's bounce jump attack is weaker and slower than Beast's but still tends to keep her safe from harm, password save (can't get one until you've beaten the first five levels - pretty rough but after that you get one per beaten level), can't grab onto ledges, fairly easy to do an upwards (flying knee) attack instead of a psychic knife attack by mistake as Psylocke, some pixel perfect jumps if you want to get the blue X icons (they give you 1 life per 3 icons collected), lives aren't shared between the characters, weird that your leader lets you train to death before going up against Magneto

- No continues and no checkpoints, before the first password you get a game over if you lose all lives with one character (wtf) - later on only that character dies, can’t control jump height (Psylocke's default height is way too high), tedious final fight (short vulnerability window, very hard to consistently dodge his attacks with Cyclops for example), some levels are very short (some are just boss fights), attacks cancel when landing from a jump, delay on Cyclops's beam attack when standing or crouching (but not when jumping), trial & error (the falling bridge segment in Psylocke's level, moves - not taught in the training mode, bosses, train, divers, some of the blue X icon locations or how to reach them without dying), can’t choose which character to use on which level (at first), Gambit and Beast kinda suck (can't attack forward or up in mid-air as Gambit nor throw cards while jumping or crouching, Gambit's triple card throw could've been slower but made more damage, beast isn't much stronger than for example Wolverine while his sprite is bigger - he does have a very strong jumping bounce attack though which can be abused against bosses), hit detection isn’t perfect (unforgiving on the blue X icons), no block or escape moves, minor slowdown here and there, no 2-player co-op mode, no in-game character select (only certain characters can reach certain blue X icons in the later levels), easy (but still pretty cool - the chopper and sentinel head) bosses in Gambit's and Wolverine's levels, safespot at Psylocke's sentinel fight in training mode,