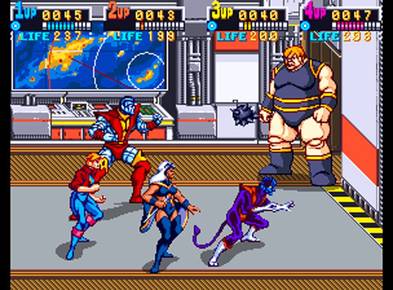 + 4-player co-op (there's also a 6-player cabinet with double screen width), large and pretty well animated sprites, two kinds of jump kick (attack at the height of your jump to do the faster one), huge explosions, grabs, six playable characters (storm, wolverine, colossus, cyclops, dazzler, nightcrawler), some memorable quotes (welcome to die), clear voices, satisfying feedback when attacking, traps also hit enemies, graphics are true to the cartoon/comic at the time, decent cutscenes in-between levels, you can interrupt bosses during their intro speech, difficulty options (8 levels, can also adjust how many lives you get per credit and max specials per life), ~12 chars on screen without slowdown, no friendly fire (can't turn it off though?), throw enemies into each other,

+/- Hit enemies when they're down, can't run (fairly fast movement though and you can do the secondary jump attack for a bit of a boost forward), no dodge move, pretty cheesy music (voice sample wankery), can't move backwards in the levels at all, game loops to the next difficulty level after finishing it?, using specials drains your health down to 1 hp,

- No advanced combos (combining buttons or changing the timing), some control issues (no control over grabbing, performing the secondary jump attack makes the camera stop following your character (you also have to re-adjust it manually), can't jump or step sideways, some trial & error (bosses seem to override your attacks at will), kinda hard to do crowd control (no breakout move and a special doesn't stop an enemy punch, can't hit other enemies while grabbing and punching an enemy), some enemies and traps can keep hitting your avatar as it's getting up after being knocked down, characters play very similarly (storm seems faster and cyclops slower - the latter has a spin kick finisher that hits behind him though), repetitive, can't jump without also moving forward, no power ups (including health drops; you do get an extra special per life at the end of levels though (see the blue orbs next to your health)) - apparently there's health and special drops in the JP version and it also makes the chars use up their special attack orbs before draining their health, pretty short (six levels or ~35 mins), some waiting for enemies that are knocked down off screen, almost no pits to knock enemies into,