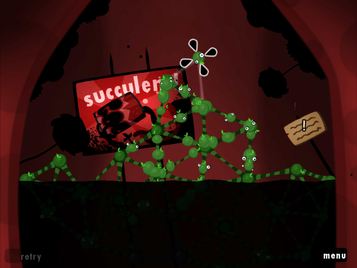 ​
​
​+ Relatively advanced rubber/weight/wind/gravity physics, Lemmings-inspired gameplay where you build a structure out of a collective of blobs which lets the remaining blobs travel to the next level, some innovative mechanics (tie balloons which lift parts of the structure - can be moved around, green blobs can be replaced after being placed into a structure, red blobs which blow up and cause a chain reaction with connected red blobs - Yoshi's Island?, yellow blobs which stick to surfaces letting your blobs traverse spinning platforms and spheres, green blobs which can be shot like a slingshot projectile, etc.), hub world with some alternate paths (SMB3; these always lead to dead ends here though), ranking system, good variation, Tim Burton gothic inspired aesthetics, some good humour ("you are incompatible with: the world", commercialism and surveillance satire),

+/-  The blobs used to build a construction aren't counted towards rescued/migrated blobs (what happens to them?), you can rewind one move at a time though the method of doing so is pretty strange and cumbersome (have to click on the white flying creatures each time and they only start spawning after a certain amount of moves made - can't have say 5 tries stored up which you can use at any point in a level), can only rewind ~5 times per level, no "avatar" continuity between levels, vague ending (never shows the sign painter or where the goo balls/blobs came from),

- Various control/interface issues (can't make all blobs move to one spot or stay still, sometimes hard to grab exactly the blob you want, blobs don't move to the "front" edge of a construction quickly enough and sometimes not at all, simply dragging a blob or object into a wall or spikes makes you drop/lose it - a balloon will fly away for example can't scroll with the keyboard and you need to move the mouse quite near the screen's edge to scroll (makes it possible to scroll into a trap and lose a blob) - also can't speed up or slow down the scrolling, can't zoom out, the help line when placing a blob to expand a structure disappears when moving out of range and the move doesn't register - makes it much harder to work quickly, can't see how many living blobs you have left, no fastforward feature, can't skip the score countdown screen), some trial & error (5-1 solution - need to grab individual blobs/balloons and "throw" them into the structure to push it sideways which isn't a mechanic the game introduces to you, there's a minimum length for each connecting stick/pipe between blobs - it isn't shown while placing a blob so if you place one closer than allowed the connection will grow out to this length afterwards, can lose blobs where there aren't any spikes in the first skull "blob" level, the dead end paths on the hub world, the flower in world 2 which kills all your blobs), can't rewind at all in level 3-2 for example, basic and sometimes ugly cutscenes, sometimes uneven difficulty curve, kind of sloppy physics in the graceful failure level (where you pull away boxes to make a blob structure fall down to the goal) - move a little too fast when pressing against the structure and it gets weird, the final levels don't test your mastery in using each type of blob or combining them in new ways, can't skip the staff roll, a couple of the backgrounds make it hard to see the help line when adding to a construction,

Bugs:
-Sometimes buggy rewind feature (only goes halfway back or between two moves which can screw you over once more)
-Alt-tabbing sometimes crashes the game
-Sometimes can't read an unread sign after finishing a level (after the continue button drops down on screen),