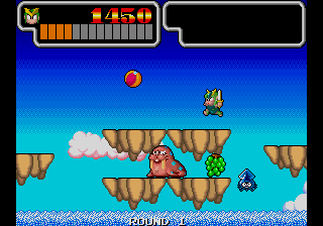 +/-
Short time limit on all weapons but the default one (kind of annoying when facing bosses), can't aim up- or downwards

-
​Credits don't work in the final level, repetitive (repeats 2 levels, shooter levels all have the same simple layout), some trial & error (cheap hits if you have the wrong weapon, fast flyers, bosses), the desert level and boss (too fast and frantic), some control problems (somewhat slippery movement, can't crouch, no jump height control), loose scrolling (you end up too close to the edge of the screen when running towards it), no speed adjustment in the shooter levels, sometimes you really need to be able to shoot backwards (you can only carry one weapon at a time)