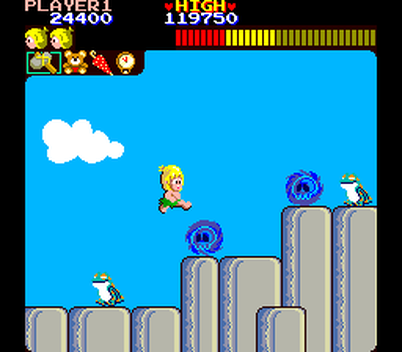 +/-
Poisonous looking mushroom makes you find better food (same effect from the hidden letters)
better food=junk food
unique kind of level timer (gradually decreasing hunger meter)
die in one hit w/o the skateboard
2-player alternating only
run and attack mapped to the same button, two worlds+one enemy (vulture) and two bosses fewer than in the SMS version (SMS version also has mostly different boss heads and one of the boss types (which appears twice) throws lightning instead of fireballs), alternate final world and ending (find all the first 28 dolls/all 32 dolls), one negative power up (drains life faster, temporary), more unique items to collect (not sure what they do if anything but they have their own icons in the HUD), can't destroy boulders (unlike in WB3: Monster Lair), can't replay beaten levels (to find dolls), start from the last checkpoint even after using a credit (easier to progress but harder to collect missed dolls, start from the beginning of the level on SMS), letting go of the run button after a running jump doesn’t change your momentum when trying to stop after landing compared to holding it down

-
Repetitive (less background variation than on SMS)
trial & error (some really obscure doll locations (waiting until a frog jumps into fire in 3-2, jumping into fire at 6-3), platform traps in 3-1, falling platforms - harder to spot the falling clouds here, cheap platform and enemy placements, frog and blue guy behaviour, some boss patterns)
can't move backwards in levels (easy to miss the letters for example)
you start moving slightly after the intro to the main theme in each level (instead of on beat - not so on SMS?)
somewhat slippery movement (take a few extra steps after letting go of the d-pad - slightly better on SMS?)
​super slippery ice (takes too long to stop), no title screen music (add on SMS), no hidden bonus levels? (ten of them on SMS), can't stop while on the skateboard, can't aim up or down (can be annoying in downward slopes), no alternate weapons or weapon upgrades