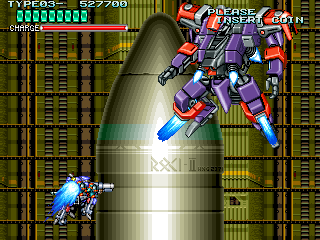 ​
​+ 2-player co-op, context senstitive melee attack (Shinobi, later used in Lords of Thunder), some branching paths between levels (labeled hard or easy in the briefing), alternate endings depending on if you picked the hard levels or not (four in total), four different mechs to choose from - can also build your own custom mech before beginning (choose one of four parts in three categories - melee weapon/sub weapon/legs (body), can switch the legs/body during gameply after using a credit), control the pilot in a small flying mech if your main mech gets blown up (can restore the main one but it's quite hard to pull off in most levels), handles aiming pretty well for the time ("strafe" while shooting, can turn around while not shooting), many large and detailed sprites, lifebar in a shoot 'em up/run 'n gun, charge attack which you can charge while shooting your main weapon (works similarly to a smart bomb attack), somewhat in-depth difficulty options (player and enemy lifebar length options, enemy spawn rate frequency option (also has credit worth options); no standard difficulty mode options though), slide move (down+jump), you won't be damaged simply from touching most enemies (Shinobi - here you'll also bounce slightly if you landed on an enemy or got pushed against the screen's edge and can keep bouncing repeatedly which is kinda fun), pretty intense action, minor in-game transition cutscenes between levels and basic briefings before levels (both are skippable), some dialogue during gameplay (doesn't interrupt it), fairly impressive music (YM2151+OKIM6295), gun drones/mascot robots (collected in the levels, they'll scatter when you get hit but can be picked back up), minor 2.5D elements (can move along some ramps in the background - basically turns gameplay into a standard shoot 'em up for minor segments in each level, first boss moves in the background but can be hit normally from the foreground), instant charge meter refill power up (triggers when picked up though), good bosses overall (most have multiple phases), mini-bosses (these are repeated several times though)
Saturn/PS1: Arcade and special/tweaked mode (some legs have new abilites (dash, double jump) here and levels have been tweaked a bit), optional redbook soundtrack with new tracks, option for voiced briefings (can't be skipped if turned on and they disrupt the music), new CGI intro and ending cutscenes (decent), one extra level on SAT,

- No weapon inventory, can't turn around and shoot without also triggering the charge attack, can't slide to the left while shooting right and vice versa, you're a somewhat large target in main mech form considering the amount of enemies and projectiles on screen but the lifebar helps, no jump height adjustment, trial & error, some unavoidable damage?, can't aim downwards, a bit short (~35 min per run in the JP ver.), the grenade gun weapon (G) kinda sucks against regular enemies
Localized ARC versions: Removed branching paths (makes you play all levels instead)+in-game story+briefings+alternate endings