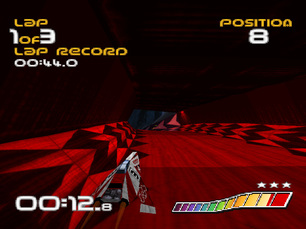 +/- ~8 seconds of loading before and after each race as well as when booting up the game, randomized power up containers, can't get destroyed or destroy other cars?, can't carry more than one power up at a time, need to use air breaks before curves for them to be effective (so you need to learn the courses 100% to beat hard mode),

- Huge speed loss from hitting walls at higher speeds (improved in the N64 version, hills can also slow you down considerably), glitchy hit detection at higher speeds, getting shot right before a jump, huge difficulty spike at silverstream/the ice course (why the hell is it slippery for hover cars?), trial & error (figuring out what each power up does, game only shows course maps when loading the race for a course and you can't display it during the race, no rear view mirror or camera angle (you do get a warning from the announcer when someone tries to attack you though), so-so draw distance at times (slightly worse than in Ridge Racer overall, slightly better in the N64 version?) - makes the Rapier tournament really hard, no info on team or driver stats when picking them (teams are different while drivers aren't)), lacking feedback from bumping into other cars and from the announcer when picking something up/reaching or losing first place/winning or losing (the results screen - improved in the N64 version), no replays?, hitting a cpu car with a shot and then bumping into it is better for the cpu than for you, the intro doesn't transition well into the title screen (different logo position, loading time), using a boost power up at a ramp can make you go off course and get picked up by the robot (that normally picks you up if you fail the jump - would've been more fun if you could jump really high and only get picked up if you land off course), can't discard a power up to get the next one,