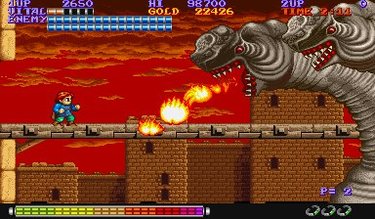 +
Hidden familiars who move with you and attack the enemy (hard to find since there are no clues as to where they are)
some intense action
​minor RPG elements (use gold collected from enemies in shops that sell armor/hints/weapon upgrades, physical and magic attacks)
two different characters to play as (Willow and Madmartigan, unfortunately the game chooses which one for you in all stages but one)
decent length (7+ stages)
charge attacks (upgradeable), good jump controls, dodge/slide move (down+jump, no invincibility time, a bit clunky - can't be cancelled or redirected like in Mega Man), good art direction, large and detailed sprites, good/decent animation, good variation, frequent checkpoints (can be a problem if you lost armor power ups before the most recent one), difficulty options, 2-player co-op?, nice cutscenes (skippable!), good bosses overall, some mini-bosses, sleigh ride segment, decent dialogue (lines from the movie?), some cool spells as Willow (freeze all enemies, smart bomb, 'napalm'), some enemy projectiles can be blocked as Madmartigan

+/-
Can't shoot/swing up or down
can't move while attacking (can jump though)
time limit which continues when in shops (less of a problem once you've read all hints/know what items do)
illusion of choice (hint to take the wagon in stage 2 when it's the only way to go)
cartoony in-game graphics mixed with more realistic (see the movie) cutscene stills
respawning enemies (hard to grind for money since respawned enemies give less and a mini-boss of stage one appears in invincible form to fight you if you hang around for too long), can't slide on platforms you can jump down through (can mess you up if you're not prepared), hard to get the final spell/weapon unless you play really well

-
Steep/uneven difficulty curve (somewhat easy final two bosses, gets pretty hard already in the second stage at the wagon segment if you didn't upgrade your weapon, snowy tent area - quickly respawning enemies followed by a fairly tough boss, maze segment in the final stage - need to get three doors right)
sometimes unforgiving hit detection (the eagles during the wagon segment)
trial & error (enemies take a lot of hits unless you charge and upgrade your weapon, some blind jumps (can't look up/down), enemies quickly jumping down from above, boss patterns)
need to hit chests several times to open them (unnecessary flow breaker)
repeats enemies towards the end
​pretty much all of the shopkeeper's hints are useless, some voices are a bit scratchy

Notes:
Maze directions are left, left, upper right unless it changes upon reset