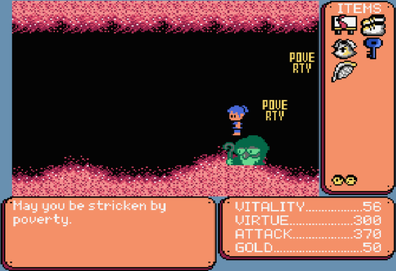 
​
​
​+
Unusual premise and setting (a japanese/buddhist version of the christian heaven?)
Platform adventure/ARPG gameplay (towns with NPCs, shopping, gear and tools, stat building (collect stars from killed enemies - each kind of star boosts either a stat or your gold))
Can stand on NPCs and enemies (SMB2; kill enemies by jumping on them repeatedly to bury them in the ground beneath)
Very good jump controls and separate jump button
Can kill town NPCs and you're punished for it (you'll lose virtue although it's a very small amount), comments from some enemies during gameplay which doesn't interrupt it (see River City Ransom), some interesting gear (wings allow flight but only in one dungeon (button mash style), halo - thrown projectile that locks enemies in place, upgraded halo (talk to the old man near the beginning) - gets stuck where it's thrown and can then be used as a platform), can replay beaten dungeons,

+/-
NPCs generally act like pieces of a walkthrough
No journal/quest log feature
Virtue stat is increased by killing enemies
Return points in dungeons (similar to Wonder Boy III)
Can briefly stand on spikes without taking damage
Have to catch stars as they fall since they'll disappear when landing (similar to Kick Master), burying enemies on a single tile platform just makes them fall through it (sometimes into spikes), somewhat non-linear structure (need to grind to break from the beaten path though),

-
Barely any guidance at all in the beginning and you can waste you money on various items (need to buy sandals and finish the first dungeon?, cotton shoes (let you walk on clouds) don't work before finishing the first dungeon)
Short loading between each screen in dungeons
Hard to kill 2+ enemies at once
No save feature?
Unlimited continues but continuing always puts you at the beginning of the game? (and at 10 vitality)
Trial & error (need to upgrade the halo before going to the clock tower, need the glasses to enter the hidden dungeon near the eastern end of town? (water bowl) - still can't see the entrance with them though, no item descriptions in-game, if you go into the first door in the first dungeon and then go back in you'll go back to the beginning of it, tight jumps between screens), many enemies take too many hits to kill considering how easy they are and you usually can't skip these enemies either, cheap hits when moving between some screens and from the drops in the ice dungeon, very slow acceleration in the ice dungeon without the angel's boots (which are expensive at 200 gold - you don't actually need them though since the dungeon is pretty easy) and ice physics still apply when standing on enemies in there, can't fly in town/heaven with the wings and they're used up after one dungeon (despite still being in your inventory), unavoidable damage in the third dungeon (hot hells), pretty simplistic level design overall (long corridors with some pits and spikes here and there), boring underwater segment, mostly low difficulty throughout but with some unforgiving platforming segments, somewhat confusing and unsatisfying ending (shows a single still image of you (or the mirror image?) and your friends cheering with heaven's inhabitants then the game resets when you press a button)