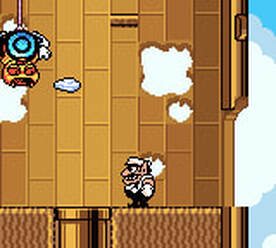 ​
+
The hub map is back and works a bit differently (as you find and unlock hidden treasure chests you beat levels and see new levels or paths unlock on the map depending on what you found (basic environmental effects - an axe will cut down a tree and open the path where it was and a rain cloud will create a lake for example), several found items cause environmental effects which change the level layouts a bit (for example: the chemical flasks/containers move the 5-ton blocks in N3 The Vast Plain and W5 Beneath the Waves by spilling chemicals on the ground under them, the fan allows the wind to be turned on in W4 A Town in Chaos while the switch is turned on, the flute awakens the giant snakes in some levels), some branching paths)
Binary day/night switch that triggers when re-entering the hub map and which has effects on gameplay (sometimes different enemies giving access to different parts of levels, in some levels certain gates are only open during night or vice versa)
Gain permanent abilities which let you progress as well as reach new parts of previous levels (these are pretty disappointing overall though - see below, the game briefly shows which levels to use a gained ability on right after getting it with flashes on the map screen)
Can exit a level at any point (this can be used to switch to night or day) - eventually you gain an item letting you do it on the map screen
Some new temporary transformations (vampire (destroys enemies and the fat frogs blocking your way in some levels, can also turn into a bat which can fly), invisible - pass certain gates, electric - short knockback while destroying touched enemies, string ball - like the regular ball form but bounces off walls and breaks yarn blocks+you can't jump (meh), snowman - similar to string ball except you can walk until going into a slope)
Good variation
Good puzzles overall (some get tedious because you need to memorize several screens of level design or from the control/level design issues noted below)
Somewhat comical tone
Pretty nice cutscenes in-between some levels
The looking glass lets you see which treasures you've gotten on the level you’re standing at on the map screen (press B on the map screen; gained pretty late but before that you can pause while in a level to see which chests have been opened and which key(s) you're carrying)
Good animation, unusual setting (miniature world inside a music box - mix of modern day and fantasy/surreal elements), can hold B to see the available paths leading from the level you're standing at on the map screen (not ones you haven't unlocked yet), unlockable Time Attack mode (get all 100 treasure chest items; goal here is to open all 4 chests in each level as quickly as possible), can go back to the initial location (temple) to get told where to go next - can also just press up at that location on the map to get the direction without triggering the dialogue scene (can press select while on the map screen to teleport to that part of the map), large multi-jointed final boss sprite (similar to Virtual Boy Wario Land and Dynamite Headdy), different music during transformations and during different times of day, minor sequence breaking possibilities (in the colossal hole level you don't need to become flat for one of the chests, more?)

+/-
Save anywhere (also auto-saves when exiting a level, one slot per game)
Same Wario Land 2-style gameplay at its core (invincibility, transformations that occur when hit by different enemy types, using enemies as platforms, crouch jump, destroy blocks using enemies, strange atmosphere, can use slopes to temporarily turn into ball form and break blocks in narrow paths, can still dash forward into air similar to DKC's roll move, etc.)
Collectathon element (7 crayons to unlock one more mini-game (just a longer version of the golf one - no rewards gained for beating it, can unlock its last course by getting all big coins.. lame!) - luckily this is all optional)
Partially non-linear structure (linear until you get the first ability - you're locked out of various parts of all the early levels, two optional levels)
You still start out with the tackling move (power up hats are still gone = no fire breath or flight however you do gain the upwards smash as a permanent ability and its icon is the horned helmet)
Decent-good boss fights but since you're invincible and because of getting kicked out in one hit most of the fun is lost (two exceptions are the beaver fight where you can get back onto the background wall if you move fast and the football/soccer game against the rabbit)
Enemies respawn when re-entering rooms but destroyed blocks don't (some enemies that you want to avoid also respawn as soon as you move away from their spawning point)
Minor delay between tackles and you can't mash them like in MMX
25 levels (compared to 51+ levels in WL2) but here you revisit each one several times to explore more of them and to unlock new levels on the map
Getting fat to stomp feels redundant when you have two abilities for it (there are even "fat only" blocks)
Some treasure has no gameplay effect besides the time attack mode unlock (perhaps these could've all been the same color to make it easier to skip them for casual players), short video tutorial of each new permanent ability (unskippable, temporary transformations don't have them), cave of flames and warped void levels stay the same regardless of the time of day, don't need to manually carry keys like you would in WL1 here (done to let you solve other puzzles more smoothly while carrying one), no objectives relating the levels to the story here (See the early game of WL2; the story doesn't really progress until you've collected all the main treasures and returned them to the hidden figure and then it ends), almost nothing to spend coins on besides the unlockable longer version of minigolf game

-
Some control issues (since WL2: huge knockback, some transformations get incredibly frustrating to use because you can't cancel them and manual control is lost (Wario on fire, zombie form, spring form, yarn/string ball form in some rooms); lose control of Wario for a sec when jumping into water, have to not be pressing left/right when trying to climb a ladder or it doesn't work, can't break two horizontally adjacent small blocks at the same time with stomp - can do it with super stomp at least but then that one doesn't work on the harder blocks, twitchy camera when flying as a bat or super swimming in streams)
Some tedious aspects (not being able to reach the key for a chest during either day- or night time leads to some backtracking, various tedious vertical platforming later on where you have to redo a longer segment if you make one mistake (grasslands, volcano's base, vast plain sun segment, wild river, above the clouds, etc.), tedious to get thrown out of boss fights from one mistake, having to go back and into horizontal pipes to turn off your invisibility and be able to open a chest, can't stay in a level after opening its chest, too many minor dead ends from not having the right ability at the right moment - worst early on but it goes on until the late game, throwable objects tend to break when dropped and the game makes you carry them past hazards before use, have to redo the giant tree segment at least once because they placed the blue key on the outside of it and made you drop down to get it)
Some trial & error (super stomp can bounce fat frogs upwards a bit (east crater) - the video tutorial for this move implies that you can't move fat enemies with it and that puzzle is weird anyway in that you should be able to stand on the platforms if the frog can, you're not shown that you can remove fat frogs by being frozen by bears and sliding into them - have to use this in the town of chaos at one point, can't make the fish boss eat a piece of moldy cheese if it reacted to Wario first - no matter how well you line it up it'll just swim past the cheese, sometimes you can only break a wall by throwing an enemy at it but the blocks/tiles aren't marked as such (usually they are) - same with the wall tiles in bank of the wild river that can only be tackled with a super tackle since they're also unmarked, some one-way pipes and horizontal ones arbitrarily remove your invisibility form, a few other one-way paths, can't tackle the zombie enemies and if you stomp them you still get transformed, 2-3 leaps of faith)
No level maps (hard to get a good overview of some rooms - can't look up/down either)
Chest keys+big coins+bosses respawn when re-entering levels and so do a few puzzles that unlock parts of their levels (such as the torches at the beginning of the tower level)
Forced finding and playing of a mini-game to get to some treasure chests in some levels (an OK take on minigolf, there could've been a few different ones but you don't have to play it a lot)
Can't stomp/carry and throw enemies/swim underwater from the get go - have to gain these as abilities (kinda lame when you could do it before but to be fair the stomp was a power up in WL1)
Four of the abilities are just upgrades to what you had (super charge/ground pound/swim/throw) - means only super jump is a new ability and it's really from Metroid 1 (however you can increase the height by bouncing off of enemies here - Mario-style)
Less detailed graphics than in WL1 in some ways (Wario looks very different and less likeable)
No alternate end bosses and endings here, dropped coins disappear after a few seconds (only used to pay for playing the mini-games though), unskippable cutscenes (most of them are short though), some of the music is a bit annoying or overly simplistic

​
Notes:
-Level maps: https://www.warioland3.com/downloads.html
-Got about 80% of the treasure