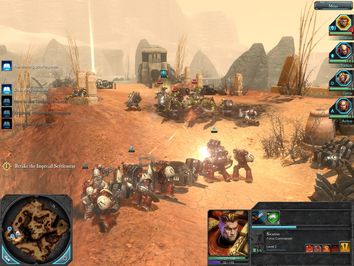 
​
+ RTT/SRPG gameplay (heroes/squad leaders have character building and gear customization (gain exp and find loot during missions, choose which stat to level up (ranged, melee, stamina, energy/mp; there's also a small skill tree baked into each of these stats which is a bit different for each hero) and what to equip between missions), partially non-linear campaign (not quite on the same level as the DoW1 expansions), interplanetary campaign, can trade gear for experience points (there's a lot of gear to find and the exp rewards are decent so you'll actually be gaining levels from this)), more intuitive and meaningful cover mechanics (shows heavy and light cover with a color indicator, can occupy or destroy neutral buildings and towers), destructible cover (certain weapons like flamers also ignore cover) and partially destructible scenery, some AI improvements (squads under fire seek cover, ), more realistic vehicle proportions, fall back command (makes a squad more resistant to ranged but more vulnerable to melee damage), play campaign missions in co-op via Steam, pretty good voice acting overall, difficulty options (four levels - these only affect unit stats though?), last stand mode (co-op survival mode against the AI), pretty good intro cutscene (some of the eldar's behavior in the intro is kinda dumb though) and some good cutscenes in-between missions, some innovative boss fights (the tyranid that hides and regenerates in bushes that you need to destroy), the game automatically shows a comparison of the stats for the gear you're looking at and what the selected squad leader's currently carrying, you can redo stat choices after leveling up a squad (until you start the next mission), pulls off the 40K art style very well overall, infestation mechanic (the more you ignore the tyranid invasion on a planet the tougher they get on that planet - would've been cool if the other factions also had an infestation/strength level though and at certain points you can't choose to keep driving out the tyranids as the game instead wants you to progress the story), fight alongside Imperial Guard in two missions, use all 6 squads plus Gabriel Angelos (your superior) in the last mission,

+/- No base building (instead you capture certain buildings that will help with reinforcements) - you do defend and destroy bases in some missions though, can only use up to four (out of the eventual 6) different squads in a mission (each with a hero leading it) - this leads to having to leave 1-2 squads behind adding a strategic element (but since you can't choose where to deploy or to scout ahead more for intel (you get some in the briefing if you've captured a communication array on the current planet but it can be lacking) before a mission and you can't exit a mission without wasting days this element is lessened), four default MP races (Space Marines, Orks, Eldar, Tyranids; w/ Expansions: Imperial Guard, Chaos Space Marines), ~10 seconds of loading time before each mission, no in-game manual (to check hotkeys for example), game keeps going after failing a mission (the only penalty is that you lose a day (some missions are only available for a set period time) - you end up on the map screen and can level up before replaying the same mission and getting more loot during the same mission), pick up loot without having to reach it with a unit, heroes can't die - only get knocked out until revived or you complete the mission, ditches the board game-style battle map structure from the previous game's expansions (to focus more on story), enemy heroes are strengthened to the point of basically being boss fights and you tend to face them at the end of missions (possibly inspired SC2), can be awarded with one more turn/deployment in one day but it's very hard to pull off, the commander can destroy minor scenery by running into it (silly but kind of awesome at the same time), the AI will use the fall back command liberally, can't toggle passive abilites on/off (for example Tarkus's energy-based frag grenades which eat up energy you might want to use for something else), you'll find terminator gear long before you find terminator armor and dreadnought gear some missions before you get a dreadnought, can't trade items between squads during missions, the shown gear rewards in the mission selection screen is generally worse than the random drops you find during the missions, no melta guns, skirmish mode is a simplified hybrid between the RTT of DoW 2 and RTS of DoW 1 - however you do get to pick between 3 different commanders here (offense/healing/defense types; apothecary/healing and techmarine/defense aren't playable in the SP campaign),

- Can't save at all during a mission and only one save slot per game in the campaign (plus you can't reload from before a mission after starting it), trial & error (no warning that both picking end mission and exiting to windows actually means retreating and saving - means you should always play and fail the mission while gaining more exp for your heroes and that you can't simply try out a mission to see what it's like and then restart it pick a different mission, ambush right at the start of one of the vs. orks missions, can only carry 5 of each consumable item and if you pick up more than that then that item is wasted, can't use demolition charge on neutral buildings and if you try there's still a cooldown after clicking the icon, can't cancel a fall back/retreat move or change its rally point at will (units will move to where you started the mission (alternatively as space marines the rally point can be at the Landraider Reedemer or Techmarine's Orbital Relay)), only the Space Marines (Blood Ravens chapter) have a SP campaign, no game speed options (and can't issue orders while pausing (this was actually patched out of the game!) - becomes a problem at times because you'll become so busy with switching between squads and using abilites that you can't properly focus on what's going on even after memorizing all the hotkeys), having to move next to relay beacons to reinforce squads slows down the pacing considerably, kinda cheesy and somewhat dumb story and script at times, some control/interface issues (no scatter/dodge command, can't use Esc to close sub menus, some delay when trying to move a character performing an attack, can't cycle through squads inside buildings with Tab), can't replay a defense mission right after losing it (despite the "we will have to retake this shrine" comment) - opens one mission later though but at a time limit, somewhat harder to distinguish between units than in the prequel (at least on high gfx settings), some story oddities (doesn't make sense for the eldar to attack human cities?, tyranids are described as not caring if squad leaders/heroes are killed but during mission you are advised to take them out to disrupt the regular troops, your troops don't move into the city before angel gate closes during the in-game cutscene), no lore archive/journal feature (you get a bunch of lore from the loading screens for example but it can't be reviewed at will), can't edit the hotkeys, the ranking system doesn't blend well with not being able to reload a previous save to restart a mission, fairly obvious pop-in for some minor parts of the environment (grass), no meaningful choices in terms of how the story plays out, pretty easy final mission after the first phase, repeats some minor cutscenes towards the end, some SP missions are too similar

Bugs:
-Some supply boxes won't open (at the start of the first Meridian mission (vs Eldar) and at the end of the Farseer mission on Meridian),
-Low but noticeable buzzing noise during quiet parts (always there regardless of master volume)
-Sometimes the tooltip for a piece of gear doesn't show until you move the mouse cursor over it one more time

Notes:
-Couldn't find a game to join for last stand mode (only tried once though)