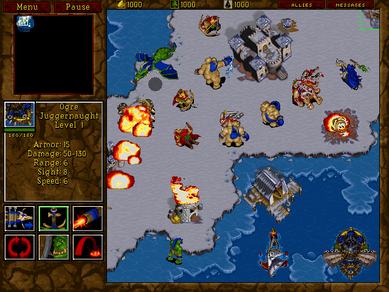 * Beyond the Dark Portal

+/-
Tile-based (units move along and buildings snap to a low res grid)
specific spawn points from buildings allow for some interesting tactics
fastest speed makes some tactics invalid online (too fast to micro w/ lag)
can't normally make a group cast the same spell but it's doable using a trick (click one unit in a control group, then the spell hotkey, then alt+# of the group, then click the target)
enemy air units (and your own) can get in the way when selecting your ground units
​linear - lack of strategic control over the war in SP or ways to change the story, unit hopping (see Warcraft Occult tactics)

-
​Orcs are a bit overpowered (Bloodlust - Healing is much more micro intensive and not effective enough of a counter, Hasted & Unholy Armored DK's are also too good - the only counter is Polymorph)
other imbalances (archers/trolls aren't very useful in vs. games, skeletons and flame shield are pretty crap, Exorcism is a bit too strong, Fireball is much weaker than Death Coil)
somewhat dated interface (only 9 units per control group, can't queue units in production buildings, no rally points or waypoints)
some pathfinding problems (makes the game very micro intensive)
CPU AI isn't great (peasants can quite easily be interrupted in their gathering and turn idle, no difficulty settings either, won't help computer allies, placed units are bad at reacting to danger, enemy AI isn't compatible with some maps (builds its base very poorly)
​clunky sea transport controls when loading/unloading, walls can only be built in multiplayer (and the AI doesn't know how to deal with them), some annoying sfx (gnomish inventor building - you can turn them off but it's either all or none), Ballistas/Catapults can have their shots canceled if you tell them to attack again while a shot is being fired (even if you clicked the same target it was firing at), somewhat repetitive SP missions (rescue, protect specific unit, destroy enemy/specific building, guide troops to allies base/checkpoint), having to kill even the last farm and/or enemy unit to win (can turn missions/matches into a tedious hunt for the last enemy unit/building), dragons/griffons are very clunky (need to split them into several control groups to make them not kill each other), some trial & error (only Polymorph counters unholy armor, unit spawn mechanics (you can have units hop over sea or forests), sappers/demolition squads can't be hasted, the enemy AI paladins will react to your death knights before they can see you - casting exorcism), the two races are pretty much the same except for their spellcasters and archers


Notes:
Beyond the Dark Portal expansion - Adds two new SP campaigns which are harder and progress the story, a new map tileset and some new hero units 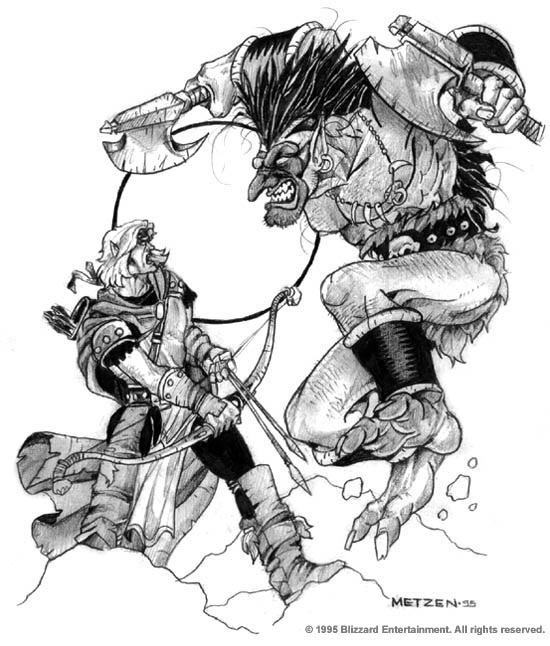