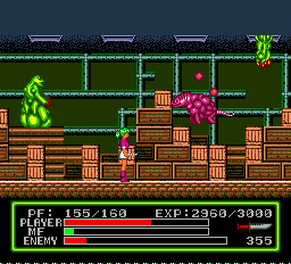 ​
​
​+
JRPG/Action Platformer hybrid (similar to Zelda II from the same year, enemies drop exp orbs and hp/mf/ammo orbs in this ver. - to balance this there are far less recovery items in the top down segments compared to the PC-88 release)
Switch weapons during combat (pause)
Upgrade weapons manually via the pause menu (PS REM/Psychic Sealed Remedy - seal psychic energy in the weapons; need to collect and use mind force - basically MP but it also affects your defense when stored)
Survivor rescue mechanic (escort one at a time to safety by leaving the building he/she's in - previously you had to escort them all the way to the church?)
Zombie invasion/horror theme (the backstory is pretty similar to Resident Evil)
Skippable dialogue but you can only skip the entire conversation?
Some cool weapons (Flamethrower - effective against aquatic creatures, Grenade Launcher, Bazooka)
Radio item
Two bugs were fixed in the fan translation
Faster movement and simplified interaction controls compared to the MSX version
A few new areas which were not in the MSX ver.,

+/-
Password save (can only get one at the cross in the church; the boat will always be placed outside the church when loading a game) - previous versions had battery save
Random encounters on the overworld
Resource management (ammo, limited item inventory)
Female protagonist (Lila Alphon)
Need to talk to NPCs over and over to trigger more dialogue and some events
When you're in the boat you can almost completely eliminate random encounters by hugging the coast
Lose mind force/MF when injured in battle
Returning to the church will cancel the effect of PS REM on your weapons so you'll have to re-use it after leaving (you go there to restore HP and MP/MF if needed so it's kinda weird)
At key moments in the plot you will be notified that your MAX MF has increased - this is also a good time to go back to the church and talk to everyone (manual tip)
The boat is a bit harder to find than on MSX
Only the HP of the strongest enemy in an encounter is shown and only that enemy can drop an exp orb?, can't move while crouching,

-
No day/night cycle or ability to sleep
Roughly half of the enemy types were cut in this version making the game a lot more repetitive
The game isn't as non-linear as it first seems (you can barely do anything in the first two locations you come across due to not having any keys, after getting the boat there's still a mostly set order in which you should rescue people to trigger the next event)
Sudden difficulty spikes (city hall, school, )
Overly large overworld with no in-game map (check the manual, the world was made bigger than in the MSX ver.)
While the rate has been lowered there are still very frequent random encounters in some areas
Backtracking (need to talk to everyone for new info after rescuing someone)
Some control issues (loose scrolling in battle makes it much harder to react to enemies, fairly easy to accidentally escape from battle due to how small and crowded battle scenes are and having to jump around to dodge bullets (if you get knocked back by a bullet you also escape even if you didn't mean to), stiff movement near walls and other objects, nearby survivors won't talk while you're escorting a survivor, default jump height is pretty high, vertical-focused jumps (see Contra))
This version is missing some other content found in the MSX ver. (the larger knife, one NPC (Harvard), several dead NPCs whose corpses you can find, a handful of extra enemies, a unique end boss, the sleeping bag which increases healing when resting, night-vision goggles which improve your attack during dark)
Less detailed (but more colorful) top down environments here
So-so animation overall, sometimes garish colors,
the shotgun uses too much ammo per shot to be useful?,
​