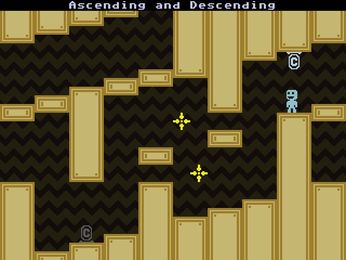 
​
+ Easy to get into, excellent art direction (consistent style; creates something fresh from familiar material, also fits perfectly with the soundtrack), seamless world - no artificial gating (switches, power ups - the usual zelda/metroid stuff; only the challenge of routes keeps the player from exploring them), cryptic and engaging story (find clues through terminals spread out over the game world), fast paced, interesting main gameplay mechanic which is explored quite well (metal storm gravity switch), good map system (fog of war LA style, found trinkets aren't marked out though), teleporters (mostly well placed),  gravitron mini-game (way too hard), extra game modes (flipped world, no death mode), level editor (!), some good puzzles (the trinket which requires you to avoid checkpoints to get, the trinket which you get to by using the smb2 style screen looping to your advantage), somewhat comical (room names), some innovative level design (green stage, rescue mission, the bouncers (these revert your fall)), good dialogue, you can replay intermission levels

+/- Checkpoints at every new segment (cheapens the challenge a bit, annoying when you're going towards a dead end just for a collectable), no upgrades, no bosses, no defeatable enemies, unlimited lives, auto-saves at each teleporter (this can be annoying if you're speedrunning/aiming for less deaths)

- Trial & error (the speed of your fall really makes twitch gaming impossible later on), somewhat repetitive, floaty walking control (V takes a few steps extra before stopping), can't re-read terminal messages without re-entering the screen, not very interesting character design (except for the elephant), lots of dead space in the main game world, unnecessary dead ends and backtracking, no second quest/hard mode (ie nothing in-between normal and no death mode - getting all the trinkets adds greatly to the challenge though), uneven difficulty curve (doing things the hard way, smb2 trinket, final stage, the tower), no way to warp out of a level you've beaten before? - forces you to backtrack after each trinket

Review:
A stripped down and focused game which takes the mechanic from Metal Storm (removing the gun) and explores it further in a Metroid-like game world. The game's puzzle design is excellent overall and an optional extra challenge is provided through items put in hard to reach areas (though some are simply found by exploring the hub world). The visuals are distinct and charming, and the music quite memorable. Some things keep me from giving it a higher score, though. One being the fact that frustrating action segments are countered with extremely frequent checkpoints instead of proper (fair) redesign. The other is an empty and overly large hub world, and finally there's an escort sequence later on in the game which overstays its welcome. Overall, VVVVVV is impressive for a two man effort and a rewarding experience for platformer/puzzle fans.