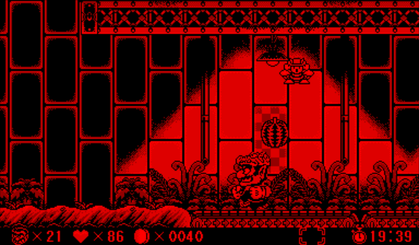 ​
​+
Some 2.5D elements (hazards and enemies moving on the z-plane, new z-plane mini-game)
good variation
great art direction
like in Shinobi you can bump into (unarmed) enemies without getting hurt - unlike in Shinobi they get knocked over and you can carry and throw them
the helmets (dragon - fire breath, bird - flight, "viking" helmet - stomp/tackle)
hidden treasure, bonus games, save feature, somewhat different endings depending on your completion/collection rate, upgraded bird/dragon/viking combo helmet (shoot through blocks like the ring in Alex Kidd and through walls as well, long flight and stomp in one helmet), play as a selfish bad guy for a change (WL series), re-balanced bird helmet (long flight without tackle or short flight with), better control of the dragon helmet's flame, pretty good bosses, mini-bosses, very good animation, smooth sprite scaling, minor puzzles, some new gimmicks (the sideways fans (MW4?), the clocks which spawn an enemy or item if you wait),

+/-
Jumps have more vertical length than horizontal which takes some getting used to - similar to Contra but not as bad
have to find the key in each level to be able to open the exit
can replay beaten levels but have to backtrack through them to do it?
more hidden rooms but no hidden levels
level timers (long though)
easy to rack up extra lives, "win" a girl if you 100% the game,

-
No world map
linear structure
minor control issues (can't turn around while crouching)
pretty slow paced unless you can keep the bird helmet or upgraded helmet (the tenth level/mansion, some rather long detours which don't lead to a treasure or key, no standard run move, somewhat slow jumps, can't tackle while using the dragon helmet, sometimes slow transitions)
some trial & error (finding some breakable blocks, some bosses)
​some backtracking for the key in some levels, no difficulty options, a bit repetitive at times (many horizontal and one screen tall segments), loose scrolling when climbing up waterfalls, less response from the game when finding a treasure compared to WL1, somewhat tedious second boss, can't hold an object while climbing a ladder and can't carry an object through a door, a bit short compared to WL1, difficulty spike at the final boss,