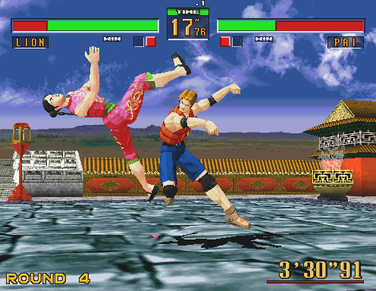 +/- Can't cancel most moves (see Flashback-style games), escape-able throws (hard to time and read though), moon jumps (toned down a bit though), can only block some throws?, steep difficulty curve and much harder on Normal than the prequel, pretty easy to get a ring out,

- Barely any difference between Normal and Easy, you only get one shot at beating Dural and it's a slow motion fight taking place underwater, no moves list in-game, simplistic combos and a lack of flashy moves (no fireball shots for example) as well as hit effects - can string some of them together for decent combos though, many shared moves between characters, some hit detection problems (when characters are attacking off of the default gameplay plane/not facing each other properly, some odd hit priorities (such as when using jump attacks or after an opponent lands or gets up, sometimes you can clearly see your char hitting before the opponent when both attack - would've been better if both characters were hit in most cases), often frustrating to watch a move being performed knowing you can't cancel it and that it's not going to connect, some overpowered moves and tactics (Jeffrey's throws, Pai Chan's forward kicks?), simple arenas (no obstacles or different terrain effects), some voices get tedious to hear after playing for a while, no intro (shows in-game fights with a more cinematic camera for an intro), no practice mode, very hard timing for some moves (stun palm+back body check for example),