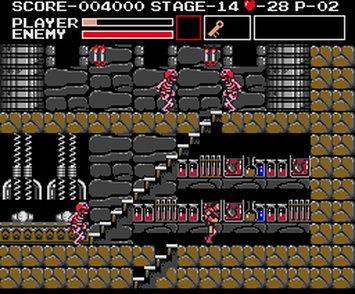 +/- Some areas loop horizontally, need to find keys to open chests (yellow) and to progress in levels (white), no scrolling, can't backtrack through locked doors, less forgiving hit detection around your whip than in the NES game, lose keys when losing a life, frequent checkpoints (some parts become harder if you die because there might not be certain power ups to get in the area and you can't backtrack - you always get one whip power up though?), no # of sub weapons on screen upgrades, holy water is overpowered, some items don't show in the inventory screen,

- No continues, weird way of using sub weapons (jump and press different buttons for different weapons), jump and climb stairs on the same button (up), can't carry more than one key at once (the cane works like a lockpick but is temporary), poor jump control (can't control length or height and can't turn around during a jump), can't turn around while crouching, need to hit shopkeepers slowly three times to be able to buy from them (and if you hit them a few times more afterwards they'll die), some shopkeepers hide in walls (weird), overly expensive items (grey spellbook helps if you manage to find one by decreasing the prices), axe was changed to behave like the cross and if you don't catch it as it returns then it's gone (the cross also disappears) - the axe and knife also replace the main attack and cost no hearts which is kind of annoying (at least you can throw two knives in a row by default), slowdown and some flicker, trial & error (suddenly need to use a door in the background in level 4 by pressing down+up/jump, sudden pits in level 2 where you'd expect to be able to jump down to a room below, can receive the same item twice from chests and shopkeepers, red spellbook increases prices, enemies in some candlesticks, after stage 9 you need to learn the entire stages to progress, very tough final levels (monkey and medusa overload), sometimes uneven difficulty curve (spike at last level with the trick keys part), sloppy hit detection at times (around the whip while moving downwards in a jump, can't jump onto certain moving platforms in level 4 - need to fall onto them, some large sprites; forgiving when fighting Dracula), huge knockback (one good thing is that it allows for shortcuts at some points), no jumping off of/onto stairs, some annoying enemies like the (constantly respawning) medusa heads and the knights in conjunction with red skeletons/monkeys/medusa heads), no password save (frequent checkpoints instead), no options, awkward controls around stairs (your character doesn’t automatically climb stairs when there’s a cliff making you fall to your death, if you stand close to some stairs you'll automatically climb them when pressing up even though you're facing away from them), smart bombs and invincibility are usually placed where you don't need them (no item inventory for them), items (including sub weapons) don't carry over to the next level (except for the map), can't jump and grab the crystal ball after a boss, some cheap hits (some enemy placements (they respawn when moving between rooms), Dracula teleporting into you, scythes spawning right next to you when facing Death, the final segment before dracula, etc.), enemies sometimes disappear when walking off screen, enemies sometimes kill themselves by jumping into pits, easy to pick up an item you don't want (from candlesticks hanging in mid-air over a pit), enemies that take more than one hit aren't stunned when you hit them, pretty easy dracula fight with the knife and/or red shield, no ending cutscene (but at least there's some epilogue text), no unlockable hard mode (second loop seems the same)?,


Comment:
I was brushing up on my early 80s games knowledge a few days ago via Mame and while I found a few games I might go back to such as Venture and "I, Robot", I wasn't able to get that far in any of them. Eventually I got to some early MSX games in my "to play" list, where I'll probably linger for a while. So, Vampire Killer. It's kind of a mixed bag, I mean this game doesn't even let you continue even though it's longer (so I used states between levels; items and weapons don't carry over between levels anyway, which is another strange decision for what is more of an action adventure game). Fundamental things like hit detection and controls are also a bit dodgy; for example you both jump and climb stairs with "up" (and yes, they do make the mistake of making you need to jump near stairs), you need to jump to use most sub weapons, and it's really hard to hit some things in mid-air if Simon is currently falling. The game has some cool ideas like the shields, the map and hidden shopkeepers, and some boss fights are less cheap here but ultimately the NES game is simply better designed overall.