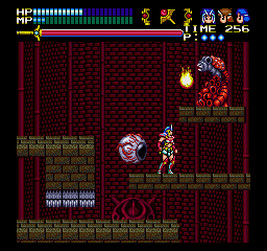 +/-
Can’t save the imprisoned women in the tower level?, sliding or slipping on the ice doesn’t affect the jump length, items disappear after a few seconds, no energy drops from enemies and no refills after beating levels, all female protagonists, some story is told via text boxes in-game (no names being ascribed to the messages can make these parts confusing at times), no lifebar shown for bosses, unlimited continues (probably, 8+ tested), short invincibility time when casting a spell (can be used without having a spell or enough MP to use one – you just need some MP), less cooldown between slides when fully powered up than on PCE,

-
Slow walking speed (PCE version is somewhat faster), so-so jump height control, tedious weapon system (the charge meter is used when sliding as well as attacking, need to be at full power to be able to attack at a decent rate), awkward jump control (see Contra), no difficulty options, the soundtrack doesn't make good use of the hardware (no DAC for sampled drums unlike in the first game, somewhat worse instrumentation), somewhat loose scrolling (your character ends up too close to the screen edge to properly react to some enemies, especially when moving upwards or to the left - also somewhat better on PCE?), missing one level from the PCE version (PCE stage 2, the mountain), uneven difficulty (some easy later bosses, very tough final boss unless you have full attack power and some MP – tougher if you die since you don’t get to fully upgrade the sword and don’t get a new spell), trial & error (some surprise attacks, boss patterns, ice level jumps), tedious ice level, you never really need to use the other characters (no specific moves that let you get past certain obstacles), odd ice physics (can’t crouch while slipping, slipping stops when jumping), no spell inventory, some unavoidable damage (green boss, final boss), so-so translation and sometimes nonsensical story, somewhat weak feedback when hitting and killing enemies, can’t switch characters during boss battles,


Notes:
See the PCE CD review for a detailed comparison to that version
​