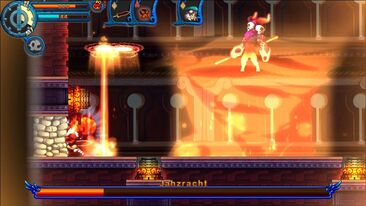 *Getting all S ranks

Bugs:
-Retrying by quitting to the main menu doesn't work against the sewer boss guarding the angel key if you do it after the fight ends. Happened again at one point for me though I forget where
-Sometimes froze my PC when returning to windowed mode from full screen (Win10)
-Blurry backgrounds when the screen scrolls seems to be a problem on some PCs but I didn't have this problem
-The boss music sometimes won't play when retrying a boss fight
​
Notes:
-*To an extent: https://steamcommunity.com/sharedfiles/filedetails/?id=285679883
-**Missables:
-Temporarily in the Crystal mines as the area gets destroyed after beating its boss (two chests and one crew should be grabbed before it and one red chest and one crew after it but before exiting the area). It is possible to go back there through Engineer's Palace once you have the Divine Key however.
The villages can be destroyed if you do not backtrack to see specific events at the right time:
-You need to kill the Yeti in Tagrum's Derelicts before reaching Ishk if you want to save the Executioner's Hall
-You need to go back to see Tagrum's Elder after finishing the Fire Temple and before killing Treu to save Tagrum
-You need to fix Ishk's Mana Heater before obtaining the Divine Key in order to save Ishk
-Some material items are finite (can't be grinded for) and if you upgrade certain earlier gear then you'll have wasted needed materials for some later ones

​
Comment:
​I beat Valdis Story (PC, 2013) the other day, reposting this from another thread that got wiped. There's a lot of ups and downs but overall it's a very good game worth playing if you're into Devil Mary Cry and metroidvanias. You get four different chars to choose from, one of them starting in a different part of the world and another with double jump, and these have different skill trees while each one can also be given a few different specialized builds with synergies between attributes and skills similar to Diablo. The boss fights are among the better ones in the genre overall and most enemies have relatively advanced behavior, there are some fun timed platforming challenges here and there, and you'll have pretty good mobility some ways into the game. The world is also pretty well interconnected and the game opens up pretty well after the early game, so you can do various areas in a different order albeit with a less smooth difficulty.

The original reddit post was mainly about the ranking system, getting into that below:
One of the more odd design decisions is how the boss fight rankings work - if you get an A or S rank for a boss fight you tend to get stat increases or skill points, which is actually pretty significant because the level cap is relatively low and you'll easily reach max level a couple of areas before the end if you explore pretty thoroughly, plus it's easier to get a high rank if you keep up with the rankings throughout the game. Getting to these ranks is often way harder than simply beating the bosses as you have to stay within a time limit, not use any healing potions (these trigger when you were supposed to die like fairies in Zelda, you can use healing spells and MP potions however), and you have to take as few hits as possible (plus if they're slow attacks it has more of an effect on this rank) as well as string longer combos together and vary attacks up somewhat. You either have to find an exploit, learn their patterns really well and/or use the right mix of gear, spells and items.
At the same, the game lets you retry a boss fight (even right after you beat it) as many times as you like, which only affects part of the game completion ranking (and if you simply reload it doesn't affect this stat but then you might have to backtrack a bit to the boss) and you can retry very quickly via the menu. You can also display your current rankings during a fight so you know when it's time to retry, and getting an S in two categories but A in one counts as an S overall (except if you used a healing potion, so there's yet another quirk). Finally there's one more quirk which is that holding back and getting an A is occasionally more beneficial for your character's build, though that can be respecced (which costs some materials gained from enemies but it's not too bad).
The ranking system's impact combined with the low level cap feels backwards since a worse player is more likely to need these bonuses against later bosses and optional ones (some of them being the hardest in the game), particularly on higher difficulties. You easily get addicted to getting high ranks but it's also the biggest source of frustration in the game.

The game is mostly forgotten now, and hasn't been updated since 2016 or so which is a shame. It could use some map system improvements like being able to place markers and view the whole world at once in the menu, one more quick travel point or perhaps a town portal item/spell, tighter controls in some regards as there are movement delays after various moves, and either a rebalanced normal mode or an added easy mode. The use of the electric whip tool and the teleporting tool could also be expanded with more advanced puzzle situations to use them in.