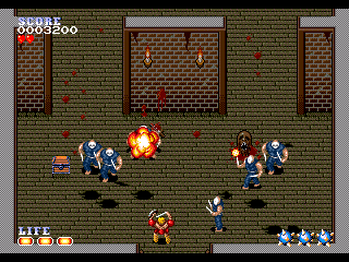 ​
+ Choose your own path, level up inbetween levels (strength, MP, dexterity, agility), good boss designs, manual shield (blocks small shots, can't shoot while using it though), great enemy variation, mini-bosses, some cool weapons (familiars, homing boomerangs), you don't have to keep one weapon to level it up (you can get 2 of weapon 1, then get a different weapon and it will be fully powered up), difficulty options, smart bombs (trigger when touched though), spinning spike ball shield (3 per life), force field shield (2-3 hits)

- Trial & error, no checkpoints, no HP refill after a beaten level, vertical movement is faster than horizontal movement, pretty hard to come by speed upgrades (need to increase agility for permanent upgrades), can't turn around to shoot down (only two weapons can shoot backwards and only when fully upgraded), awkward weapon power up system (the power ups change if you shoot them forcing you to divide your attention between them and the enemies - after two loops they'll also stop at the diamond (points only), it's not any harder to get the one of the best weapons than it is to get the worst), not enough chests to make yellow potions and smart bombs worth it (nor speed boots after a few levels), uneven difficulty, most bosses go down very fast with the right weapon and stat upgrades, the rock (lava area) level is very short, some weapons (1, 2 and 6 (familiar)) are pretty useless on Normal and above, safe spot against the final boss' first form, less detailed backgrounds, no weapon inventory, no cutscenes in this version (plain text with an artwork background instead)