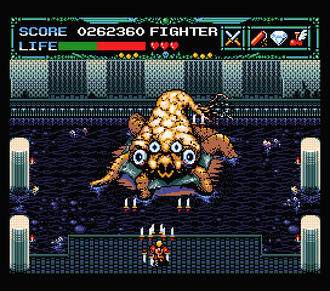 
​
​+ Choose your own path between the first six levels (out of seven), level up in-between levels (strength - axe and throwing knife/spread damage, MP - ice beam and familiar damage, dexterity - fire and boomerang damage, agility - movement speed) - need to find and collect fairies during the levels, three different characters to choose from here (fighter has a shield (can't block while shooting though and generally only protects against small shots (one exception is the giant squid's and giant bat's shots)), sorcerer can turn invisible (makes you immobile while active, not as good but can avoid lava with it), ninja can jump), good art direction, some good bosses, very good enemy variation, some cool weapons (familiars (they work like the gun drones in gradius or the clones/shadows in ninja gaiden), ice beam which passes through enemies), environmental hazards, smart bombs (trigger when touched though), armor power up (soaks up 1-2 hits of damage) and temporary invincibility potion (yellow - short duration though), longer lifebar, each weapon can be upgraded six times though the changes are less interesting than in the MD version, difficulty options (easy-hard), instant upgrade (P - rare) and random item power ups, teleporters and breakable doors in level 5/cavern, smooth scrolling, some large and detailed sprites (dungeon boss, final boss), nice cutscenes here (some animation),

+/- Bosses don't go down quite as fast here, one female protagonist out of three, no weapon inventory (what looks like one is just a display for the order in which you've picked items up), pick rensya in the options for auto-fire, some negative power ups (black potion reverts your weapon to the default one, red potion does damage, concrete/lead boots slow you down), can move through smaller obstacles without dying, can save high scores

- No continues and it's hard to gain extra lives, plenty of slowdown and some flicker, no HP refill after beating a level (and on Normal your weapon reverts to the default one?), trial & error (final level/fortress, tons of enemies and bullets, some invisible chests, a few chests are unavoidable after opening them, sometimes you need to stand on top of a chest to open it so it's hard to avoid the item within, finding the fairies - in the MD version they fly on screen, while you don't have to shoot weapon power ups to change them here you instead have to memorize the right chests since the game scrolls too fast to get them all), no checkpoints (keep weapon levels though), forward movement is faster than horizontal and backward movement, pretty hard to come by speed shoes and there's no manual speed adjustment (they're also temporary, have to put points into agility), second level's (cemetery) boss fight is just a battle of attrition, can't turn around to shoot downward (only two weapons can shoot backwards and only when fully upgraded?), it's generally not any harder to get the best weapons than it is to get the worst, you have to stick with one weapon to level it up here and switching downgrades your weapon level, some weapons (the triple shot knife, the boomerang - sucks period?, the default weapon - can't be upgraded, the fireball) kinda suck until upgraded, missing some weapons/power ups (no homing boomerangs, no spike shield, no force field/blue shield), loading times between levels (10+ seconds), sometimes uneven difficulty (pretty easy third level boss with the spread shot, very drawn out dragon/level 5/cavern boss and final boss if you use the spread shot, pretty tough squid/level 6 boss), no mini-bosses, short sixth/dungeon level, some annoying sfx, harder to open chests with some weapons (upgraded ice),


Comment:
​Another game in the for the MSX surprisingly prominent "humanoid avatar-based vertical scrolling shoot 'em up" genre. This one is quite ambitious, featuring a Mega Man-style level progression, three different characters with basic stat building via hidden power ups, six levels of upgrades per weapon and more. The graphics are very nice, with some large and detailed bosses and backgrounds that are actually more detailed than the later MD version, as well as some nice, animated cutscenes whereas on MD there was just text over a still background. Sadly it's another case of overly high difficulty holding the whole thing back, and they clearly pushed the system too hard resulting in a lot of slowdown in each level. 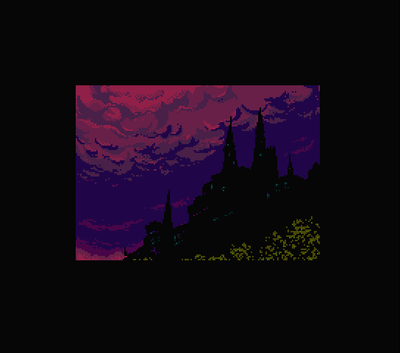 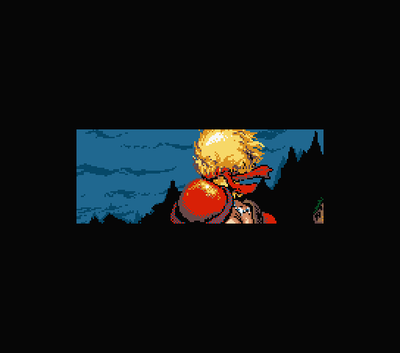 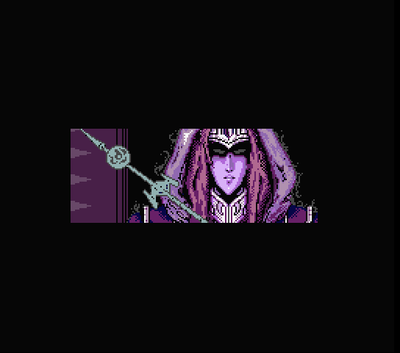 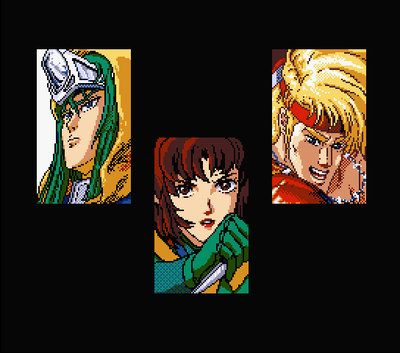 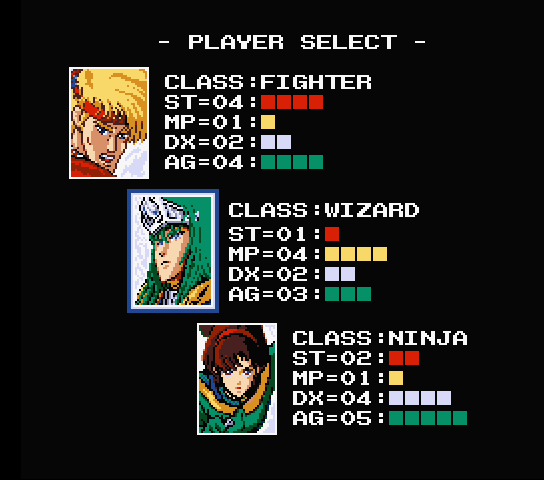 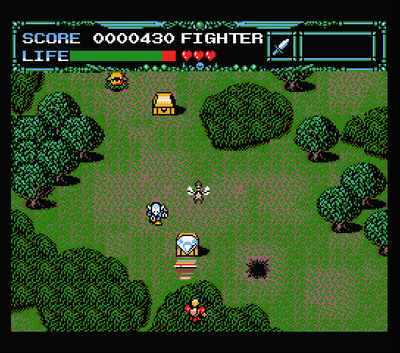 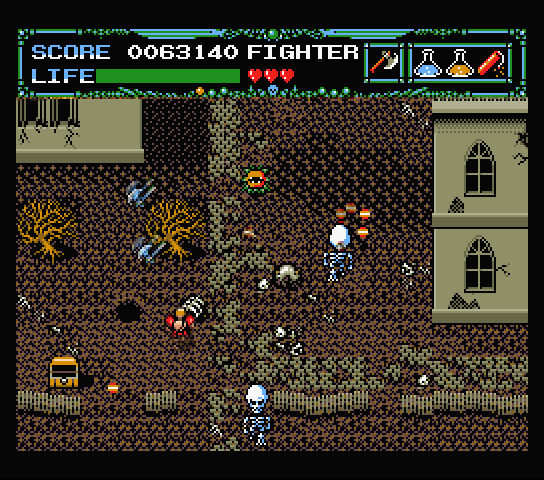 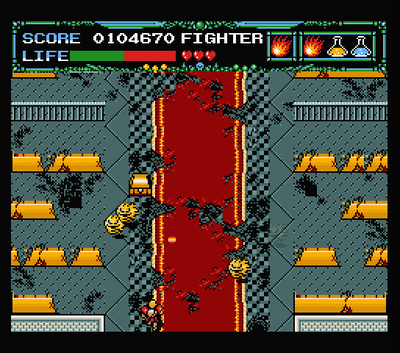 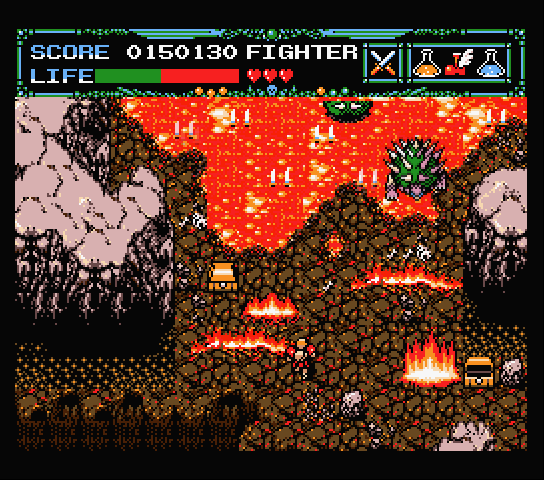 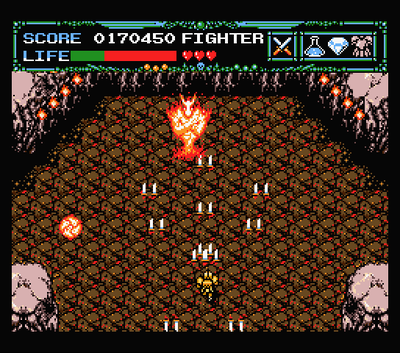 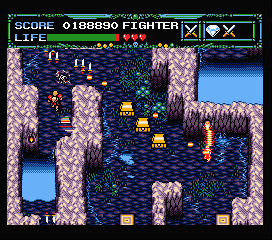 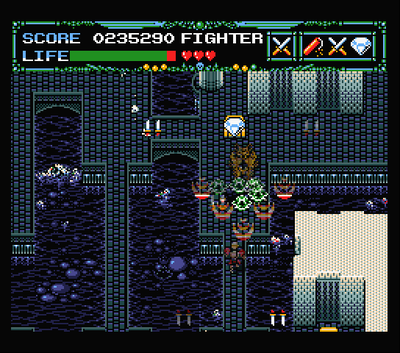 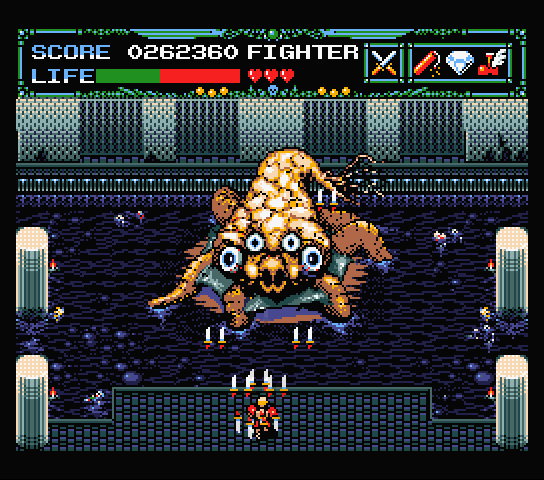 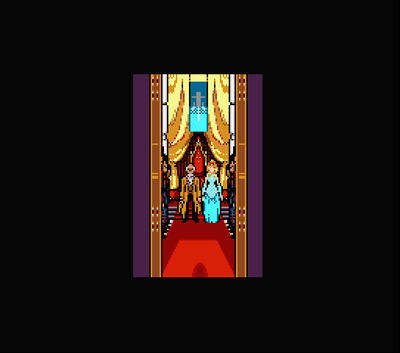 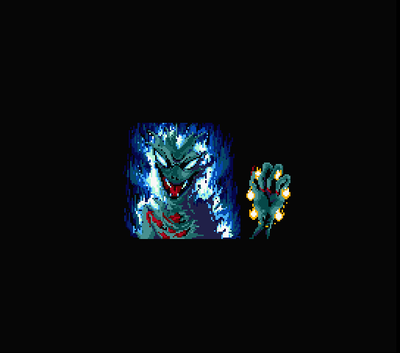 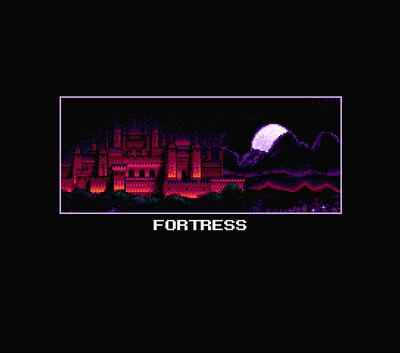 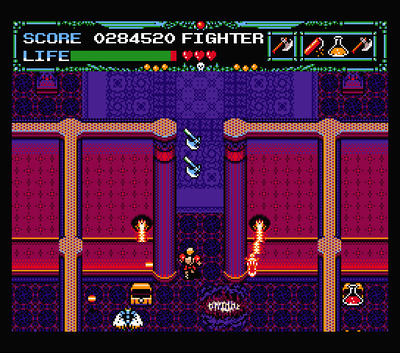 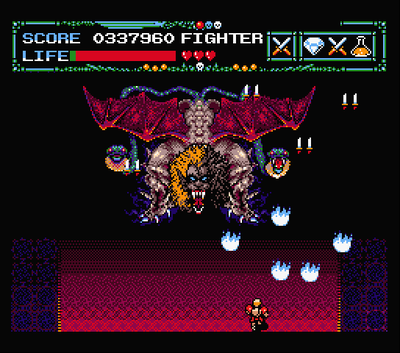 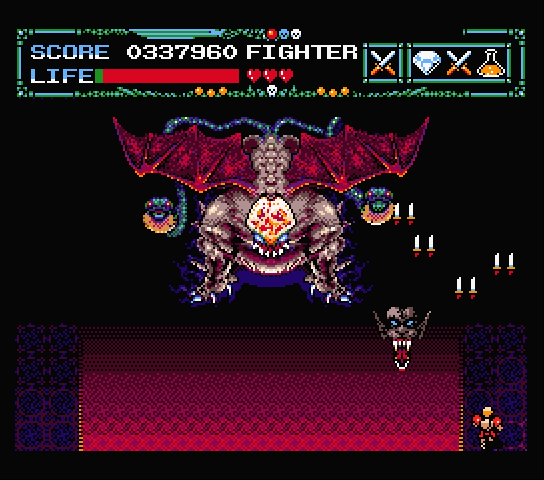