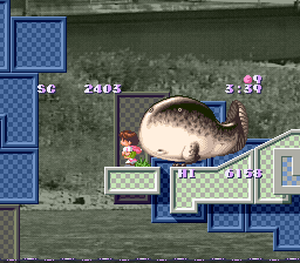 + Fairly impressive physics for the time (fishing line serves as a sort of grappling hook with a rubbery aspect to it, heavier enemies and movable objects pull you towards them instead of being pulled in, stretch out a fishing line to build up momentum and then release to bounce off - a bit similar to Knuckles Chaotix), save replays, sequence break by taking alternate exits (harder to reach obviously), off the path 1-ups that are usuall hard to get to, cute and surreal world (big fishing giving birth to frogs, walking fish, huge vegetables lying around), decent art direction overall, saves replays of your gameplay that you can watch later, l/r to scroll the camera horizontally, grab onto and climb up ledges (sometimes harder than it should be to do when you're hanging onto the fishing line),

+/- Short levels, overall time limit (rarely a problem?), no alternate attacks or items to deal with enemies, steep difficulty curve, can't hit the first boss at all with your fishing line (just goes through it), one hit deaths, no checkpoints, no intro

- Huge knockback plus you fall over after getting hit by projectiles, frequently respawning enemies everywhere (very distracting in a puzzle platformer), the most annoying enemies also can't be killed, the rubbery physics are too unforgiving and get in the way when you just want to do basic swings a la Turrican or Bionic Commando, the game would flow better if you could manually run to build up momentum, no difficulty options, no save, no continues, inadequate tutorial (shows basic moves via cutscenes (which is nice) but no button input and after a few levels they stop coming), annoyingly unintuitive and bouncy physics coupled with really precise jumps/platforming puzzles, trial & error (the physics in general, more advanced moves, fast attacks, boss patterns, cheap death at the beginning of one of the later levels (start off in mid-air if you took an alternate exit into the level), the 1-up below the first boss disappears if you don't grab it before beating it, cheap enemy placements), parts of the background look like cheap cut and paste jobs, somewhat lacking feedback when hitting enemies and when putting them in your bag, difficulty spike at the first boss, repeats a few enemy types over and over, poor ending
​