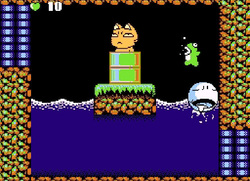 
+
Map system (need to find a compass to see your position)
Switch between four different characters with unique abilites on the fly
Somewhat comical (quirky, scatological)
Great use of the sound chip
Good art direction overall (mainly the sprites)
Charge attacks, Metroid/Wonder Boy III-like gameplay, fairly large game world for the time, some large sprites (final boss), very little slowdown or flicker, decent dialogue (some of the humour might not have carried over though), password save (only saves status, not location?), mini-bosses, some sequence breaking possible (by switching between characters in mid-air), move while crouching (pointless?), some good bosses (knight cat, alien cat), wall climbing and swimming, mine carts

+/-
Arrows tell you where to go at first (helpful but the sound is annoying and it's kind of obvious where you can't go anyway)
Insight item (shows where most other items (not medicine or keys) are on the map and is easy to find)
The map doesn't show detailed terrain/room architecture (only screen layout and locations of items plus the player avatar - adds some challenge in remembering the environments but can also lead to more backtracking)
Quite few places to refill your health (health drops are rare and don't refill much health),

-
​A bit slow paced (ghost and dino move/jump slowly and need to be used, annoying stun animation after taking a hit)
No checkpoints? (start at the beginning after death but get to keep all items and characters)
Long passwords
Some backtracking (south western snow area)
Somewhat bland backgrounds
One hit-deaths (lava and spikes in the mines), some tedious parts (getting up on a platform using jumping frogs as the ghost just to be stopped by a deep water section, mandatory 'bounce on enemies as the ghost'-section where it's pretty hard not to die and get sent back to the other side of the map, dark cave where you need to bomb through several walls in succession (bombing is a slow process)), most items are placed where it doesn't feel particularly rewarding getting to them, mostly samey and simple boss fights, some graphics were censored for the western version (crows shit on you in the original), some trial & error (a few leaps of faith - can't look down, taking the quickest path, boss patterns, one way-doors teleporting you to the beginning of an area), some dead space (mainly underwater), some invisible walls at the edge of areas, can't carry more than one medicine item at a time (the one you're carrying disappears if you pick up another one), some cheap hits when entering new rooms and when fighting the underwater mini-boss, some environmental puzzles are spoiled by arbitrary text messages in-game, so-so ending (short and re-uses the background from the intro), mostly lacks challenging enemies,


Notes:
-Wall respawn bug: switch characters after bombing a wall and it respawns - this can make you get stuck inside a wall (though you can bomb your way out of it)
-'Good bad' bug: lets you use all characters' charge attack by only collecting one of them - switch character while charging
-sometimes the health bar disappears behind a background tile (emulation issue?)