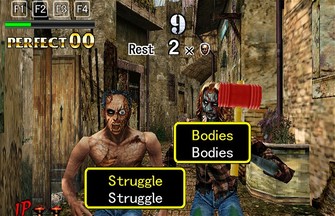 +/-
Unlimited continues (ie start from the beginning of a stage, not lives) up until chapter 6
can't change controls (would've helped with keyboard regions, switch target button set to 'esc' which is a bit odd)
space key isn't used when typing sentences (takes some getting used to)
DC version starts out a bit easier
no smart bomb or other alternate attack
it's basically a re-tooled House of the Dead 2 (similar to Cotton Boomerang)

-
Some slow menus (game over, ranking, start up)
no way of pausing in-game?
no in-game menu (back to menu/options)
some timing bugs/issues (sometimes seems impossible to type a word in time)
a bit short
​repeats a couple of bosses without making them harder

​
Notes:
Some issues with different regions of keyboards (need a US keyboard for apostrophes and =),
Arcade port (1999, graphics based on House of the Dead 2, 1998)